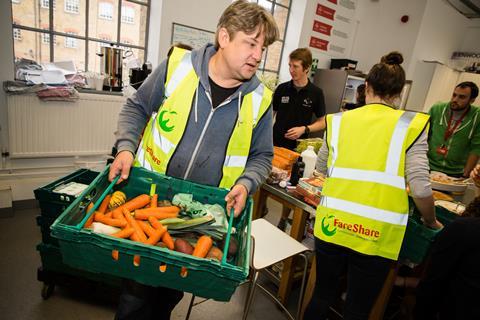 Food redistribution charity FareShare has revealed it has brought more than 150 new suppliers on board since the launch of a new fund to help supply chains divert food, won by The Grocer’s Waste Not Want Not campaign.

FareShare launched its Surplus with Purpose fund in July 2019 and said it had resulted in an additional 2,233 tonnes of food, compared to previous levels, being redistributed, the equivalent of an additional 5.3 million meals to the charitable sector.

The fund was enabled by support from a £15m scheme launched by Defra in January last year to help redistribution organisations across England overcome logistics barriers to getting food previously going to waste to charities, which was the result of months of campaigning by The Grocer.

“Since the launch of Surplus with Purpose, FareShare has on-boarded 154 new partners - those we’ve either never worked with before or haven’t worked with in over a year, all of which can be directly linked to The Grocer’s campaign,” said FareShare CEO Lindsay Boswell.

“The average amount of new suppliers to FareShare each month has increased by 61%.”

FareShare this week announced Barfoots of Botley was the latest to report a major increase in surplus food being redistributed, having diverted enough surplus veg to help create over 210,000 meals for vulnerable people.

It used the fund to cover the additional labour costs involved in packing leftover green beans, which have been redistributed through FareShare’s network of frontline charities, including homeless hostels and older people’s lunch clubs

“By working with FareShare we are able to act on more opportunities to redistribute food,” said Barfoots technical director Keston Williams.

“Previously we would have taken a business decision to send to our AD plant if the associated costs to prepare the waste was too costly.”

Meanwhile, another one of the UK’s biggest fruit and veg suppliers has cut food waste and helped to provide 47,620 meals for people in need by harvesting and packing up ‘wonky’ fruit and veg - which is then redistributed across the UK by FareShare.

Minor Weir and Willis (MWW) accessed the funding, making it cost-neutral for the company to harvest, sort, pack and transport fruit & veg deemed too big, too small or too blemished for supermarkets.

“I’d recommend any UK grower to contact FareShare and see what they can do to help,” said an MWW spokesman. “They should be donating to FareShare as the norm - there’s no reason we should be ploughing good quality edible food back into the ground.”

Boswell added: “Before launching the Surplus with Purpose fund, accessing fresh produce straight from farmers’ fields was a real challenge due to the labour and costs involved.

“This fund now means we’re stepping up our support to suppliers like MWW to help them redistribute what has previously been harder to reach surplus food - at no additional cost to them - and ensure it gets onto the plates of people who need it most.”