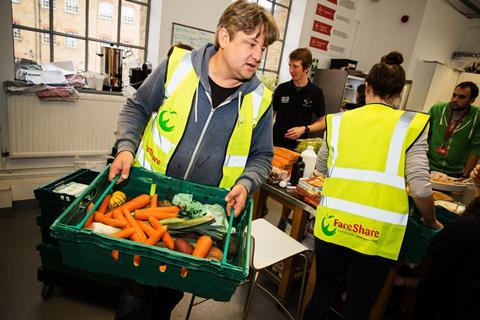 The UK’s biggest food redistribution charity has warned a no-deal Brexit would threaten the supply of surplus food to charities feeding the poor.

FareShare, which in 2018/19 redistributed almost 20,000 tonnes, or 46.5 million meals, from supermarkets and suppliers, said it feared being squeezed by the disruption to retailers’ logistics operations, and shortages of fresh food.

The charity said it had held talks with supermarkets to try to obtain reassurances. It was also considering buying more of its own lorries in a bid to mitigate the chaos facing haulage firms that usually deliver to its depots on behalf of its retail partners, it added.

“The fear is if there are shifts in supply they could have a knock-on on the surpluses available,” said FareShare director of network development Mark Varney.

“We understand the industry has a responsibility to look after its customers first … but if there are supply shortages and less surplus, that will have a negative impact on redistribution.”

The warning comes just days after a leaked report in the Sunday Times revealed ministers had been told to expect major disruption to the food supply chain, lasting months.

Codenamed Operation Yellowhammer it predicted the worst disruption to food supplies would last for three months before improving to “around 50 to 70%” of capacity. It also said there could be disruption to fuel supplies because of logjams at the ports in the event of a no-deal.

Supermarket bosses have warned fresh food will be hardest hit by shortages in the event of a no-deal because of their limited lifespan.

“Almost 60% of the supplies we receive from supermarkets is fresh food,” said Varney.

FareShare has also joined forces with other food waste redistribution charities, including Sustain, the Felix Project and the Trussell Trust, in urging the government to create a ‘hardship fund’ for ‘the increasing number of people trying to manage on a very low income’ and to help food banks and other charities in the event of a no-deal.

A letter sent to work and pensions secretary Amber Rudd and Michael Gove, who is masterminding Brexit planning, said the probability of disruption “poses a real threat to food redistribution for people most in need in the UK”, as “donations from companies and individuals could easily dry up in the event of food price rises or serious food supply chain disruption.”

It added: “We need to be clear with you that food banks and frontline charities are in no position to respond to serious food supply chain disruption, having neither the money nor storage to stockpile food.”and is one of the many reasons why we desperately hope to avoid a no-deal Brexit.”