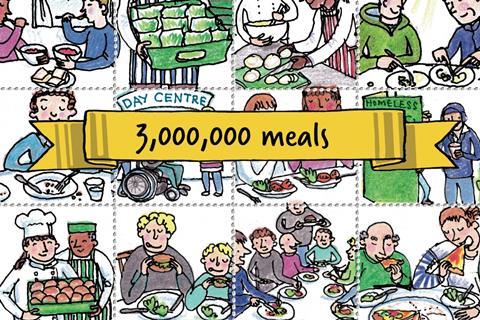 The scheme was originally launched on the south coast three years ago but expanded last year to cover suppliers from the Spalding area.

The relationship has developed to provide other services that benefit the charity, such as staff volunteering days.

The Fowler Welch network is also used to provide transport between major retailers and FareShare hubs.

“As a socially responsible business and a leader in sustainability, with recognised CSR credentials, we are always keen to explore ways in which we can reduce food waste and give back to the community,” said Fowler Welch CEO Nick Hay.

“Food waste is an issue of growing concern among our customers and having an opportunity like this which enables our customers to put surplus product to good use in their local area and beyond is a win-win.”

FareShare CEO Lindsay Boswell said working with Fowler Welch had presented a huge opportunity for FareShare to increase the amount of food sent to the people who needed it most.

“They recognised that food waste was a growing concern among their customers, and provided a solution through FareShare that benefits both their suppliers and the thousands of charities and community groups FareShare supports,” he explained.

Plans to expand the scheme further include a supplier roadshow in Heywood later in the year, inviting major brands to visit the site to learn more about FareShare, the growing partnership and how the scheme works.