The Grocer’s efforts in 2017 to concentrate our industry’s collective mind on waste, and food waste in particular, are timely and relevant. We are the food industry and an ever-increasing number of our customers are disillusioned by the perception that all business is a cynical and heartless profit machine, where the rewards go to the entitled few rather than the hard-working many.

Theresa May has belatedly recognised the importance of the environment with her 25-year plan, and we need to accept our part in solving this problem. 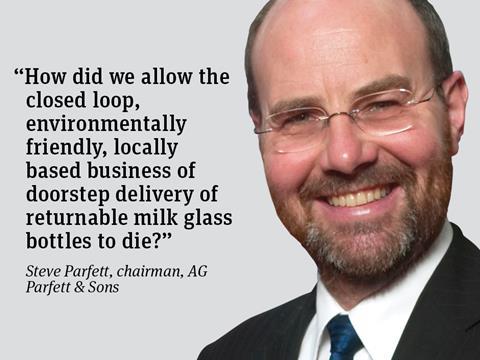 On packaging waste we have an enormous amount to do, but need to demonstrate leadership. Legislators seem to be considering the implications of widening what was originally perceived as a deposit return scheme to a wider plastic recycling scheme. In the meantime some suppliers, like Coca-Cola, are coming out in favour and others seem to be concluding that, given Michael Gove’s commitment, implementation of some change is inevitable and we had better embrace a strategy of making it workable. A coherent strategy for doorstop collection, embracing making local authorities face up to the need to recycle all plastic rather than just a few bottles, would seem a much more workable option than a deposit scheme for both consumers and retailers.

When Parfetts was founded in 1980, almost the only success story in the run-down C&C we bought was the sale (and consequent return) of glass pint and flagon bottles of cider, Guinness and Newcastle Brown. Dirty and inconvenient though it was, we would not be here today without the business we built on that unpromising start.

In that context I was astounded when I saw the ‘innovation’ in gifting confectionery this Christmas. Apparently, the major suppliers have, independently of each other, concluded that the replacement of a recyclable cardboard box with an environmentally disastrous plastic pouch was a great idea.

The next generations are rightly going to hold us, the baby boomers, to account. How did we allow the closed loop, environmentally friendly, locally based business of doorstep delivery of returnable glass bottles of milk to die? Why do loaves need to be in plastic rather than paper bags? Why should soap in a perfectly serviceable cardboard package also be wrapped in plastic? How have central government allowed the predictable fiasco of outsourcing our recycling to China? How can The Recycling Association say it has no idea what the short-term solution to plastic waste recycling is? Surely that is fundamental to its existence?

As a food industry, we have to take these challenges seriously, sooner rather than later.