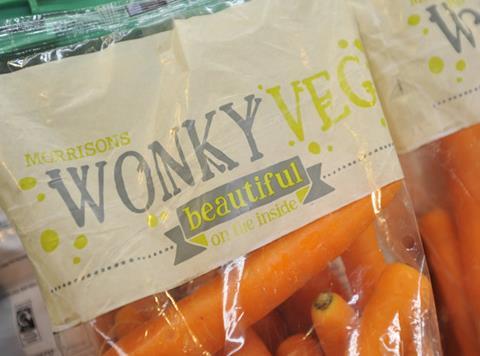 Morrisons is extending its wonky veg range to include five new varieties of fruit and vegetables.

The new lineup, revealed in a case study for Wrap, will include swede, apples, pears, sprouts, and peppers. They join cabbage, cauliflower, courgettes and leeks, which were added by the retailer last year.

Morrisons already sells wonky onions, potatoes, carrots and parsnips, and also hopes to extend food redistribution in its supply chain and from its own manufacturing sites.

“In 2016, we sold 25,000 tonnes of wonky veg,” Morrisons corporate responsibility head Steven Butts told an Efra select committee hearing this week. “As of this year we will be selling 13 different types of fruit and veg out of normal spec. Why we’re selling more is because customers like it.”

When asked by MP Chris Davies whether this was just a marketing stunt, Butts said the fruit and veg would have been used in a factory where the retailer does “slicing and dicing” if it was not sold as wonky.

“Does it mean we’re making tonnes of money on the back of fruit and veg? No, it doesn’t, really. But it is making consumers think about their food, and they’re interested in buying it,” Butts added.

“Food waste at store level represents less than 0.5% of our total sales, with total edible food waste around 0.02% on average,” said Morrisons in the Wrap case study. “We want to ensure that this small amount of food is eaten, which minimises our environmental impact, engages colleagues on the issue of surplus food, and creates greater links with the local communities where our stores operate.”