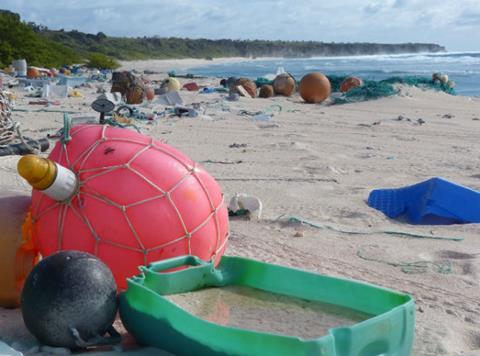 Plastic pollution in the sea would outweigh fish by 2050. Photo: Tara Proud_RSPB

MPs have piled further pressure on the government to introduce a UK-wide deposit return scheme in a bid to cut levels of rubbish in the oceans.

An inquiry by the Environmental Audit Committee heard that plastic pollution in the sea would outweigh fish by 2050 if it continued at its current rate.

The group of MPs today said a 10p to 20p charge should be placed on plastic bottles that consumers would get back upon return, with the aim of increasing the recycling rate to 90%.

A “well designed” return and reward scheme could reverse the “deteriorating” rate of household recycling and reduce littering of plastic bottles by 80%, the MPs said, saving councils £35m a year.

Labour MP and chair of the Environmental Audit Committee Mary Creagh called for “urgent action” to protect the environment from the “devastating effects” of plastic pollution.

“Our throwaway society uses 13 billion plastic bottles each year, around half of which are not recycled,” she said. “Plastic bottles make up a third of all plastic pollution in the sea, and are a growing litter problem on UK beaches. We need action at individual, council, regional and national levels to turn back the plastic tide.”

A similar scheme is already in use in 41 countries and 21 US states, boosting recycling rates to around 80% to 95%, and the Scottish government committed itself to introducing a deposit return initiative in September. The Welsh government is currently undertaking a review on whether to introduce a DRS.

“The introduction of a small charge to encourage the return of plastic bottles will result in less littering, more recycling and a reduction in the impact of plastic packaging on our natural environment,” added Creagh.

The idea has already gained backing from environment secretary Michael Gove, who in October said the schemes had “already seen great success in other countries”.

Industry backers include Iceland, the Co-op and Coca-Cola, who said it “wholly agrees” with the committee’s recommendations.

“We need to reform current litter recovery systems and we would encourage the industry to adopt better packaging designs,” a Coca-Cola spokeswoman said.

“The implementation of a well-designed deposit return scheme is something we have been championing, which could see an improvement in the recovery and recycling rates in the country.”

Iceland director for sustainability Richard Walker urged other retailers to support the introduction of a DRS and has called on the government to “act quickly” in implementing the scheme.

“We are naturally delighted that the Environmental Audit Committee recognises the urgent need for action to halt the rising tide of plastic pollution, and shares our view that the introduction of a bottle DRS would be an important step in the right direction,” he said.

The Environmental Audit Committee’s Plastic Bottles - Turning Back the Plastic Tide report also said an increase in the number of public water fountains could lead to a 65% reduction in plastic bottle use.

Producers should also have to foot more of the bill for recycling plastic packaging, which taxpayers currently pay 90% towards, MPs said.

They also want plastic producers to use 50% recycled plastic by 2023.

Although Greenpeace welcomed the report, it warned “we’re going to need to do a bit more than build a couple more recycling plants to get out of the hole we’ve dug ourselves into”.

“Once the manufacturers are given responsibility for the costs as well, the system should quickly become a lot more efficient,” said Greenpeace head of oceans Will McCallum.

The British Retail Consortium has raised concerns about the effectiveness of the scheme - which were echoed by Aldi.

“We still have genuine concerns about the effectiveness of a DRS,” said BRC environment policy adviser Alice Ellison. “Unlike many countries with an operational DRS, the UK already benefits from kerbside recycling collections and a DRS would potentially undermine this existing system, into which taxpayers have invested significant sums and which consumer research shows is the preferred method of recycling.”

Aldi said it never opposed a DRS, but it would need to see the “nuts and bolts” of how it would work.

“We are committed to reducing waste and promoting recycling whenever possible,” said an Aldi spokesman. “We look forward to hearing further details from the government about how the proposed scheme will work in practice.”

The Association of Convenience Stores previously warned a DRS would place “extra burdens” on c-stores.

Its chief executive James Lowman told The Grocer he was “not surprised” by the committee’s report due to the “way the inquiry was held”.

“If the scheme screws up kerbside collections then it’s a crazy thing to do,” he said. “The key point in their whole debate about a DRS is how it will effect local authorities and kerbside collection. That for me is the real critical issue. If a DRS undermines the rest of recycling, then it doesn’t rectify the problem.”

British Soft Drinks Association director general Gavin Partington said: “The ambition is for all our packaging in the UK to be 100% recyclable, that consumers recycle and that drinks containers do not end up as litter in our towns, countryside, rivers and oceans. As an industry, we are open to exploring whether a properly considered DRS could be a part of an overall solution and we are ready to work with government and others on this.”