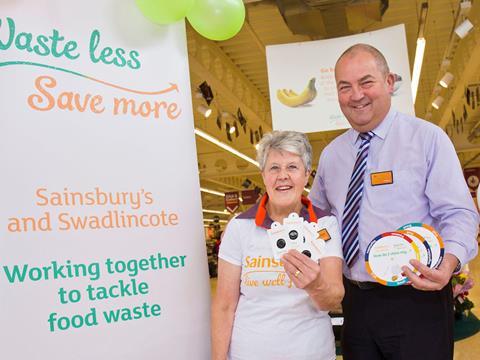 The Sainsbury’s branch in Swadlincote

Sainsbury’s has failed to halve food waste in its year-long Swadlincote trial but will press ahead with ambitious nationwide plans.

The retailer reduced avoidable food waste in Swadlincote households by a single-digit percentage in the 12 months since last January, when it began rolling out initiatives such as free fridge thermometers, a community fridge and a partnership with the Olio food sharing app in the area.

Sainsbury’s did not reveal the full details of the Wrap’s independent bin analysis but with a maximum of 9%, it will have fallen short of its initial target to cut waste by 50%.

However, the year-long initiative – which formed the initial phase of its five-year Waste Less, Save More programme – resulted in two thirds of customers saying they had already changed or were planning to change behaviour. And one third of households in the town, which is home to 33,000, said their awareness of food waste had grown over the course of the trial.

On the back of the results, Sainsbury’s has released another £1m of the £10m funds set aside for its food waste programme. The investment will fund 29 of its UK-wide discovery communities to undertake 120 development projects and trials. The remaining 118 discovery communities in the Waste Less, Save More programme will receive support and advice to help them develop local initiatives.

Sainsbury’s set out a 10-point plan to further decrease food waste, which will involve increasing re-sealable and snap-pack packaging across 300 product lines, providing education on best before and use by dates, forging a wider partnership with schools, and becoming the “lead supermarket partner” in a UK-wide community fridge network.

The supermarket named its school engagement and community fridge trials in Swadlincote as some of the most successful elements of the initiative. Its Fab Foods for schools programme, which involved taking food waste learning resources to classrooms and encouraging pupil visits to stores, resulted in schools saving an average of 21kg of food per week – the equivalent to nearly 80 school meals.

Sainsbury’s said its community fridge in Swadlincote, which accepted donations from the local supermarket branch and was accessible to the entire population, showed “huge promise”. Together with the Olio food sharing app, it helped facilitate the sharing of over 10,000 food items in the community.

Wrap said the supermarket-led initiative had achieved tangible results. “This was an aspirational undertaking and a significant investment by Sainsbury’s to address an important issue for consumers. Our evaluation found that customers clearly valued the help they received,” said David Moon, head of food sustainability at Wrap.

Sainsbury’s Waste Less, Save More project manager Paul Crewe stressed that a “huge amount” had been learned from its one-year pilot. “We now have a far deeper understanding of how to help households waste less food and save money, as well the scale of the challenge,” he said.

“Where we worked directly with households and schools, we saw clear results with tangible improvements in awareness of the issue and an appetite to see what could be changed. In addition, where we trialled interventions we saw significant reductions in the amount of food being binned and money saved,” he added. “We are looking forward to the next stage of our journey, working with communities across the UK and encouraging further momentum through our 10-point plan.”

In March, Crewe admitted Sainsbury’s was unlikely to meet its 50% food waste reduction target but said: ”I always say that we’re aiming for the stars, so it’ll still be a success if we land on the moon.”