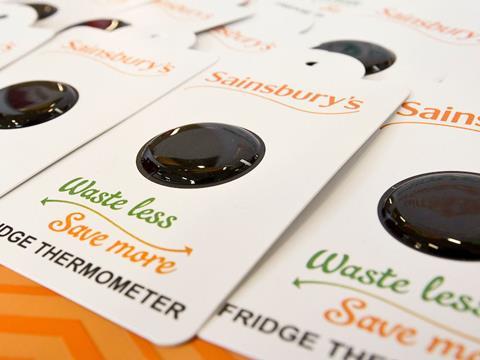 Sainsbury’s has backed government proposals to reduce food waste by giving out thermometers with all new fridges.

“One of the biggest contributors to food waste is within the household. Using their fridge correctly at the right temperature actually does a lot to reduce food waste,” Coffey told the EFRA Committee on food waste.

“I have been asking [Wrap] to think about whether we could get AO.com or John Lewis to include a fridge thermometer, not necessarily one of these expensive ones that are built in, to make it as easy as possible for people to manage the food that they buy,” she said. “That is the kind of straightforward solution that I am asking policy officials to consider how to make a reality.”

Her suggestion was based on Sainsbury’s giveaway of free fridge thermometers in Swadlincote, the site of its five-year project to combat food waste. An evaluation of the initiative showed 22% of people had discovered their fridge was at the wrong temperature.

On the back of the results, Sainsbury’s gave away a further one million thermometers across the UK last September

Paul Crewe, head of sustainability at Sainsbury’s, gave his support to a wider government policy. “Cutting household food waste is a big task and - as with all behaviour change - will take a continued, collaborative effort. So it’s great to see Thérèse Coffey showing her support for our Waste less, Save more scheme, and leading the calls for things like fridge thermometers to be rolled out more widely,” he said.

“Such simple solutions can make a big difference, and significantly extend the life of our fresh food.”