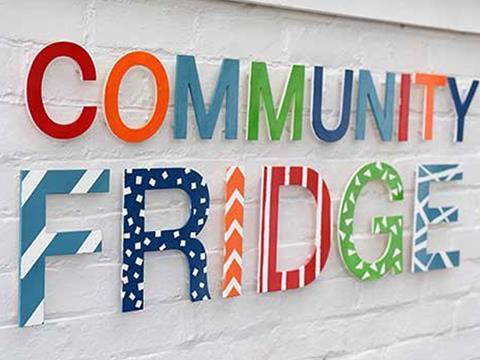 The community fridge in Swadlincote redistributed 9,000 items of food in seven months

Sainsbury’s is spearheading the rollout of a UK-wide community fridge network following its year-long trial in Swadlincote.

The supermarket will donate chilled food to at least 30 community fridges across the UK, five of which will open in the coming month, as part of a partnership with sustainability charity Hubbub and fridge manufacturer Bosch.

The fridge accepts surplus food from Sainsbury’s, other businesses and members of the public and makes it available to the wider community.

The results from the initiative, which saw 9,000 items of food redistributed in just seven months, prompted the launch of independent community fridges in Camberwell, Frome and Brixton.

In the next month, five new fridges will open in Milton Keynes, London and Northern Ireland with the support of Sainsbury’s, and more launches are planned for the year ahead in locations “from Bournemouth and Tyneside”.

Paul Crewe, head of sustainability at Sainsbury’s, said he was “delighted” to support a UK community fridge network, following similar initiatives in Spain and Germany. “This is a fantastic opportunity for even more people to reduce their food waste and save money,” he said. “Up until now, we’ve been providing over 1,000 local charities up and down the UK with surplus food that doesn’t need refrigeration - so this now gives us the opportunity to provide chilled surplus food to those that need it most.”

Sainsbury’s named the community fridge as one of its most successful food waste initiatives in the results of its Swadlincote trial in May, and committed to rolling out the concept on a national level.

Last year, the South Derbyshire Community Volunteer Service in Swadlincote - where the fridge is based - said the system was working well despite the potential for abuse.