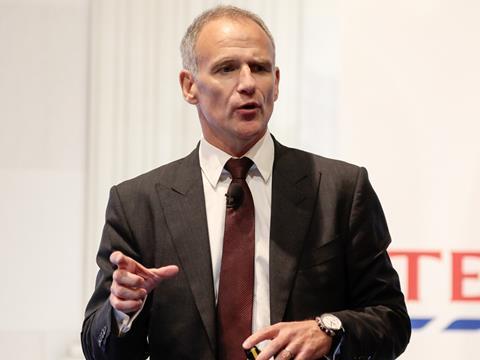 Everything about Tesco is huge. From its 3,500 stores to its 310,000 staff to the £48bn of products passing through tills worldwide. But there’s one stat CEO Dave Lewis wants to keep as small as possible. Or preferably to vanish completely. Food waste.

He isn’t doing it for the PR - or even to give Tesco a competitive edge. Roll your eyes if you like, but Lewis insists this is about doing the right thing, a phrase he utters no less than 10 times during our conversation.

“I’ve spent time in favelas in Brazil, shanty towns in Argentina and slums in Africa, Indonesia and India. I’ve seen food poverty up close,” he says. “So I was struck, when I spent time in an Extra during my Tesco induction, that despite all the routines to reduce things at the end of the night, there was food that was no longer available to be sold and was, in our definition, wasted, whether going to animal feed or elsewhere.

“So I asked store colleagues are we happy with this situation? The answer for all of us was no.”

Tesco had started to measure its own waste before Lewis even joined as CEO - publicly sharing its food waste data for the first time in 2013. And building the database was tough, says Lewis. “Taking the 25 most difficult areas and looking at it end-to-end in an audited way involved a huge amount of work. If people don’t buy into it from a social, or environmental or humane perspective I’m sure they’ll be asking ’should we invest in this?”

Indeed, when Tesco’s food waste figure in 2016 actually rose 4% in 2016, commentators dubbed its waste levels “grotesque”. Lewis was unrepentant. First, because “there is not a retailer in the world that has a waste number as a percentage that is lower than Tesco.” Second, because the increase was largely down to extra bakery waste being captured in the audit, he explains. And third, because it’s only by measuring food waste so accurately that Tesco is making progress.

And there’s been “a hell of a lot of progress,” says Lewis. If it keeps up its current pace redistributed food could reach around 11-12,000 tonnes in the next financial year (up from 2,300 tonnes in 2015/6). Since half its food waste (30,000 tonnes) is unfit for human consumption as a result of damage, food safety or legal reasons, and 15,000 goes to animal feed, “at the minute it looks like I might have an issue of 3,000 tonnes - and most of that looks like being in the bakery space.”

Ironically, while transparency and measurement has been important, Lewis admits to an element of luck in making such good progress.

“Sometimes things just happen and you’re lucky,” he says. “I was on a store visit in Southern Ireland and I noticed a colleague, a young lady who was scanning product on her Smartphone and putting it into a separate tray and I asked her what she was doing.” As it turned out the Irish business was trialling Food Cloud, an app developed by two Trinity College Dublin undergraduates that links local causes with store surplus.

“If we keep up the current pace, redistributed food could reach around 11-12,000 tonnes in the next financial year. That’s a hell of a lot of progress”

Impressed Lewis invested £1.5m to scale the tech up and bring it to the UK. The Community Food Connection scheme is now up and running in 974 large stores and 200 smaller ones. And thanks to its success, Tesco has redistributed the equivalent of six million meals since 2015. “Can you imagine the engagement in a store that used to send its food to what we call waste and is now helping local causes through food diversion?”

And he’s willing to share. Not only the tech behind Food Cloud, which is already being trialled at Waitrose, but the development of their “category specific, pack-by-pack, weight by weight audited measure” to save rivals time and money. He only has one ask of them.

“Let’s get ourselves to a place where we share the data in a disaggregated, category-specific way, end to end and then together we can do something about it. In the UK we have an incomplete set of information, which allows waste to stay a bit grey, a bit foggy. The BRC data is important, I’m not diminishing it, but it is aggregated data so you can’t really interrogate it.”

So far only Sainsbury’s has disclosed food waste figures, and they exclude food sent for animal feed while Tesco adds this in (so if Tesco were to adopt the Sainsbury’s approach, its total food waste would be 45,000 tonnes). But if other UK supermarket CEOs adopted the less onerous global protocol used by Sainsbury’s for measuring waste, Tesco would too, he adds. “We’ve always been clear we would move if it meant we achieved a consistent measurement that we could then drive activity against.”

“As I’ve said it isn’t about competitive advantage or brownie points. I shared a platform with Mike Coupe at Sainsbury’s at the Paris summit and I’ll do the same with anybody else. There is no reason anybody shouldn’t be prepared to engage now.”