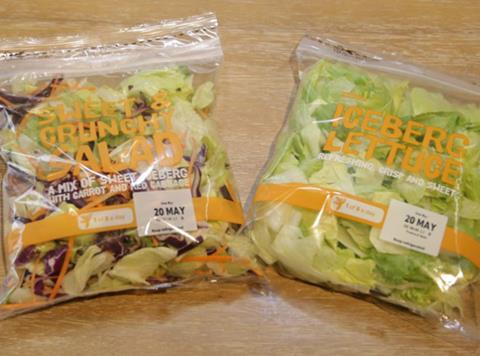 Tesco has continued its push to cut food waste by unveiling new resealable packaging across its own-label bagged salads.

The retailer said the new packaging, which will start rolling out on Iceberg (260g), Sweet and Crunchy (370g), Baby Spinach (240g) and Family Babyleaf (140g) salads, had been introduced in response to feedback from customers who had asked for help to reduce food waste on bigger packs used throughout the week.

The new packs will feature a sliding zip lock and are made from a thicker film than usual, which Tesco said would keep salads fresher and protect leaves from becoming damaged.

“Over the last two years we’ve been working with our growers to develop new packaging, which allows customers to return to their bags of salad over a number of days with very little hassle or fuss,” said Tesco produce buying manager Adam Hill.

“We know many shoppers roll up their bagged salads after using them once and stick them at the back of their fridges where they are forgotten for days or even weeks. These new bags are made from stronger material to protect the leaves from getting scrunched up.”

Tesco said there would be no price increase as a result of the new packaging, and called the move an “investment to help reduce food waste at home”. The bags can also be reused as sandwich bags after a “quick clean” according to the retailer.

“Salads are one of the UK’s most wasted foods by households. Around 37,000 tonnes are thrown away from homes each year. That’s the equivalent of 178 million bags of salad,” said Hill.

“At present, nearly 40% of lettuce and leafy salads bought by households end up being thrown away in the home,” said Wrap business programmes director Steve Creed. “We commend Tesco for introducing a new resealable packaging format for their pre-prepared salads.”

This is the latest step by the supermarket to try and reduce food waste in the fresh aisle, following its trial of new mushroom packaging using pulp in April, and the introduction of separate compartments for its chicken breasts last summer.

Tesco has also bought extra lettuces, cauliflowers and carrots from growers earlier this year in response to a glut in supply. However, it admitted earlier this month that its food waste increased by more than 4,000 tonnes last year, partially in response to an increase in food sales.