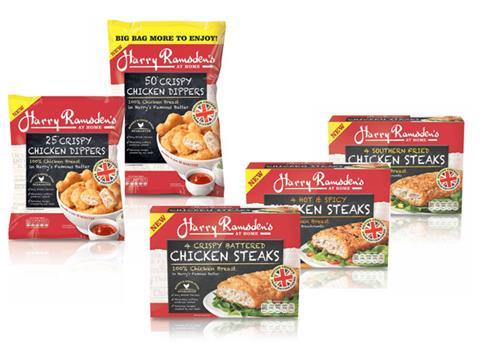 Harry Ramsden’s chicken range has been listed in Tesco

Harry Ramsden’s has expanded into the retail chicken market for the first time, launching a range of frozen chicken products into Tesco.

The four-strong Harry’s at Home chicken range comprises Crispy Dippers (rsp: £3 for 25 and £5 for 50) and three chicken steaks, in crispy battered, southern fire and hot and spicy flavours (rsp: £3 for a pack of four).

The products started going into 560 Tesco stores on a trial basis five weeks ago, and will be available throughout the summer. They would be reviewed afterwards, Harry Ramsden’s said this week.

Although the range was currently only in Tesco, it was not exclusive and listings with other mults would also be pursued, a spokeswoman added.

Harry Ramsden’s was known first and foremost as a fish-and-chips brand, but chicken was now the second most popular menu option in its restaurants, said CEO Joe Teixeira. “This, combined with the fact that Harry’s cod fillets are already widely available in UK supermarkets, leads us to believe that offering the new range of chicken options is the natural and logical next step for Harry Ramsden’s.”

All Harry’s at Home products are made with 100% British chicken, and have on-pack flashes flagging up their provenance.

They are produced in Thetford by 2 Sisters Food Group, which has owned the Harry Ramsden’s brand since 2010, and will sit alongside the existing Harry’s at Home range of retail fish products, which will continue to be produced under licence by Birds Eye.

Harry Ramsden’s move into the retail chicken market comes after the restaurant chain announced an aggressive expansion drive earlier this year, with plans to open 50 new restaurants and create 500 new jobs in Scotland over the next five years.