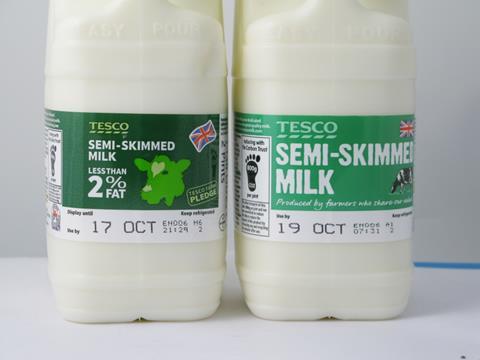 Tesco has delisted its Creamfields budget milk range, in a move that ­signals its milk price cuts from last week are here to stay.

Creamfields milk was previously available as semi-skimmed and whole, priced at £1 for four pints. Tesco first started offering it in 2009, when it was launched as a key tool in the fight against the discounters, but pulled the range last week after cutting the price of its own-label standard milk from £1.39 to £1.

A spokesman for Tesco confirmed Creamfields milk would no longer be on sale. “We keep our ranges under review to ensure we offer our customers the best value and choice available,” he added.

Tesco has not said how long it plans to keep its standard own-label milk at £1, but its recent press ads have stated the price of its milk was “down and staying down”.

“It shows we’re in for a season of low prices and underlines with a big red marker pen that they are serious about their milk price cuts,” he said.

However, he added, the delisting did not necessarily mean Creamfields milk was gone for good - it could return if prices on Tesco’s standard milk went up again.

“As soon as we start seeing value going back into the category, there’s a rationale for Creamfields to re-emerge. We’re talking about a seven-day shelf life product here - it only takes a flick of the switch, and it can be turned back on again.”

Milk was the ­reason Creamfields was launched in the first place, but Tesco has expanded the brand into other dairy categories in recent years. Creamfields cheese, yoghurt and cream remain on sale.