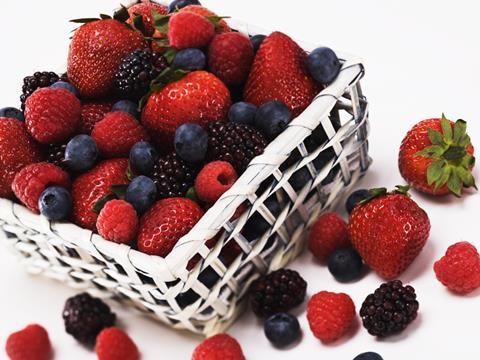 Europe is set for a berry boom, but supermarkets and suppliers need to look towards integration if they want to cash in on the category, according to a new report from Rabobank.

Berries are outpacing the “sluggish” wider European fruit sector, the report claims, with consumption of fresh blueberries, raspberries and blackberries expected to grow at least 7% a year in the next five years, and strawberry consumption nearly 2% a year.

The UK has seen particularly strong growth, with berry market value doubling over the past decade to reach £1bn, according to British Summer Fruits data.

Fresh berries could become a “strategic and differentiating” category for supermarkets, Rabobank says, but success will depend on better year-round availability of berries, as well as consistent quality, sustainable production and improved affordability.

Suppliers that rely on traditional fresh produce trading models will struggle to meet these demands, Rabobank predicts. “The many links in this supply chain only trade on a transaction basis, which results in strong price swings and inconsistent quality,” says the report. Instead “strong vertical cooperation” will be needed, with sizeable, semi-integrated suppliers best positioned.

“Eventually, about 10 such soft fruit specialists in the EU will supply large food retail and foodservice customers,” says the report. “This means we’ll see a considerably less fragmented supplier base than is currently the case.”

As competition from “low-cost” regions in Southern and Eastern Europe emerges, Northern European growers will have to focus on quality and efficiency. “They will need to plant new varieties more often than they were used to,” the report says. “Price will not be the differentiating factor; quality and availability will.”