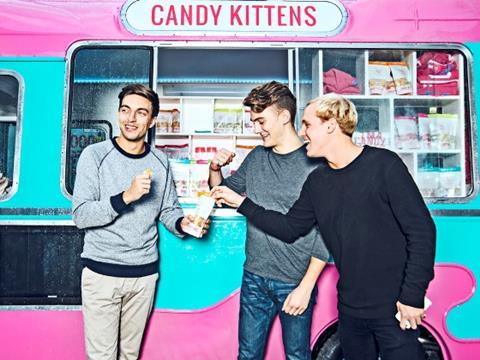 Candy Kittens hopes to raise £300,000 via a crowdfunding campaign launching later this week.

The confectionery brand plans to use the cash for an “experiential marketing blitz” to capitalise on its new listing in 350 Tesco stores and help double sales to £2.5m by 2017.

Since its launch in 2012 in Harvey Nichols and Selfridges, Candy Kittens has won shelf space in more than 1,700 UK stores, including in Sainsbury’s, Waitrose and Topshop.

“We don’t see the point of bringing in a big guy that’s going to be a silent partner,” MD Ed Williams said. “If we have 1,000 people investing £50, that’s far more exciting to us. They have real opinions, they already buy the product and they are the audience we are trying to reach.”

Founder Jamie Laing, who starred in reality TV show Made in Chelsea, has opted to raise the cash through the Seedrs, with the pitch launching at a private event on Thursday (26 November) and going public on the crowdfunding platform from Monday (30 November).

Laing added that the business had also been “really careful” with the £3.7m valuation – with a 7.5% stake being given away. “People have been wild and crazy with their valuations on crowdfunding,” he said. “We have spent hours talking about what level to put ourselves at.”

The minimum investment will be £12, with rewards including spending a day at Candy Kittens HQ and taking part in new products tastings at the development stage. “In a cheesy way we want to give something back to the people who buy our products,” Laing said

The business has opted to raise the cash through Seedrs, with the pitch launching at a private event on Thursday (26 November) and going public on the platform next Monday (30 November).

Williams said he opted for Seedrs as it was the first crowdfunding platform to gain authorisation by the Financial Services Authority (now the Financial Conduct Authority) in May 2012.

“Regulation is one of the less talked about bits of crowdfunding but it’s one of the most important,” Williams said. “We wanted to do this exactly by the book. Investors have to be 18, which is what we wanted”.