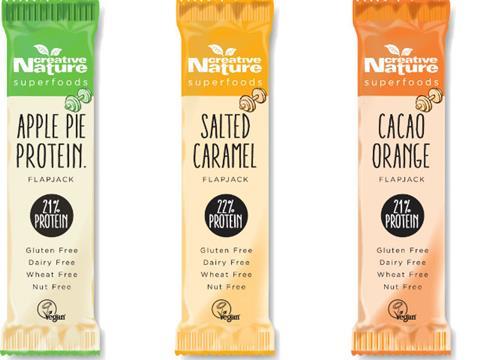 Healthy snacking brand Creative Nature is in talks with private investors after turning down the £75,000 secured during an appearance on Dragons’ Den.

Founder Julianne Ponan, whose appearance on the show was aired on Sunday evening (20 August 2017), received an investment offer from Deborah Meaden of £75,000 in return for a 25% stake in the business.

Although she accepted the deal while in the Den earlier this year, Ponan has since declined the offer after winning new supermarket listings for her flapjack bars in 2,300 Co-op stores and allergen-free baking mixes in 500 Sainsbury’s sites.

Ponan told The Grocer that she was currently in fundraising talks with private investors and a VC group.

“Being in the Den was an incredible experience,” she said. “It was amazing to meet Deborah and have her want to invest in Creative Nature.

“I’m sure we would have benefitted from Deborah’s expertise and I would have loved to have worked with her. However, since the filming of the show, I have secured even more contracts directly with major supermarkets by myself and have decided that the investment deal offered wasn’t the best current route for my business.

“Deborah was very understanding when I explained why I had decided not to take the deal and wished me well for the future.”

“We are currently in talks with private investors and a VC group who recognise the huge potential in our brand,” she said.

The Dragons were all impressed with the entrepreneur and the brand on the programme, but Peter Jones and Touker Suleyman called her original valuation of the business of £1.5m – based on a request for £75,000 for 5% equity – “ludicrous” and “crazy”.

Ponan, who suffers from anaphylaxis, wanted to create a range of free from foods that were gluten, nut and dairy free.