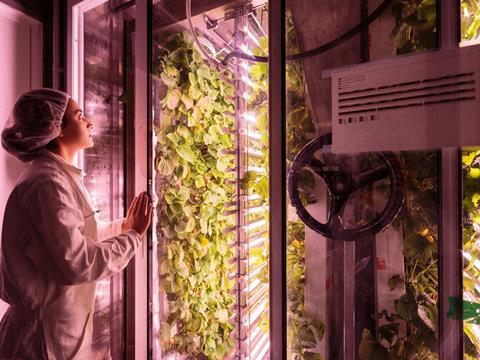 A French startup has raised €4m (£3.4m) from venture capitalists to develop shipping containers into compact and self-contained farms that can be based almost anywhere in cities and towns.

Agricool was aiming to install 75 containers across France next year, and produce about 91 tonnes of strawberries grown in its Cooltainers, said co-founder Guillaume Fourdinier.

Cooltainers can fit into two car parking spots, and transformed shipping containers into a “fruit and vegetable paradise” added Fourdinier, with all growing conditions, such as temperature, irrigation, lighting and ventilation optimised to allow crops to grow in perfect conditions.

The crops are also grown vertically on container walls rather than horizontally, and as a result, Agricool claimed each Cooltainer was about 120 times more productive than the same space in a field, was powered by renewable energy sources, didn’t need pesticides, and reduced the amount of water needed by 90%.

The company’s first crop was the strawberry, “one of the symbols of lost quality over the past several decades”, Fourdinier said.

The Cooltainers could be managed “even by those without any previous experience in farming”, said Agricool, and the business also plans to begin work on growing two new crops next year.

It was also looking to target the UK. “London would be a really great city to grow tasty and healthy strawberries,” added Fourdinier.