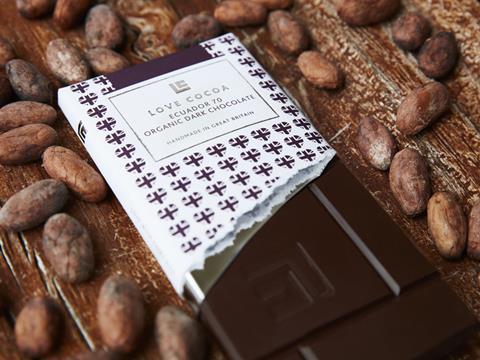 A descendant of the founder of Cadbury is launching a £100,000 crowdfunding campaign to fund a bigger push into retail and overseas as his luxury Love Cocoa brand grows rapidly.

James Cadbury, the great-great-great grandson of John Cadbury, launched his organic chocolate startup in July 2016 in a bid to restore his family’s legacy following the hostile takeover of Cadbury by Kraft in 2010.

Love Cocoa started as a direct-to-consumer delivery service, with its range of six bars of premium chocolate sent out in a box designed to fit through letterboxes, but has since won listings with Fortnum & Mason, and is set to be stocked by Harvey Nichols and Planet Organic this month. The crowdfunding campaign will launch this weekend on Seedrs, with the 7.9% equity on offer valuing the business at about £1.2m.

Cadbury plans to use the money to raise brand awareness, expand his team, continue to build the international business and to target bigger multiples like Waitrose.

“Love Cocoa launched last year to build on the principles of the ethical company Cadbury originally was,” he said. “The business has lost its way and forgotten its roots in many ways as Mondelez cuts costs to keep shareholders happy. I want to go back to what Cadbury was when it was first founded when the goal was to make a quality bar of chocolate. Mainstream chocolate brands have too much sugar and palm oil that doesn’t need to be there and they could have raised the price and kept the quality but chose to cut costs. We want to be a more expensive but better quality alternative.”

Love Cocoa is growing rapidly as it picks up new stockists daily and exports to retailers in China and Japan, with overseas sales making up half the business.

Manufacturing is currently handled by a third party - with NPD taking place in Cadbury’s London flat - but long-term goals include opening a factory in the Midlands or Bristol.

“Birmingham and Bristol would be obvious spiritual homes given the history of Cadbury and the closures after the Kraft takeover,” Cadbury added.

“I’m proud of the Cadbury history and legacy, especially what they did in the early years, which I want to take forward in Love Cocoa.”