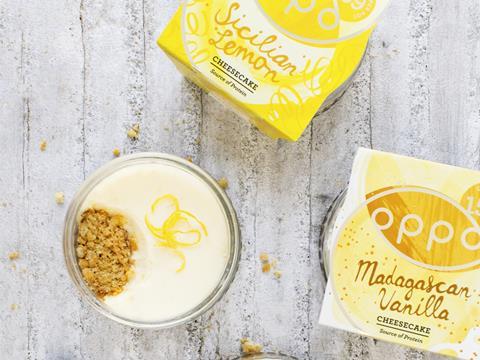 The fast-growing business secured the loan from private investors and is offering a share buy-back to its crowdfunding shareholders ahead of plans to raise cash in the New Year.

Co-founders Harry and Charlie Thuillier said 500% growth this summer meant the company had tight cash flow and had to raise funds to “stay afloat”, but is now in a sustainable position after borrowing £500k from private investors.

They plan to raise more than £1m in further funding to support working capital in January 2019.

Oppo insisted it remained profitable, but “cash flow was tight” as sales rocketed following new listings in Asda and the launch of a new dessert range in Sainsbury’s.

In an email to shareholders before securing funding, Oppo said “to stay afloat we will have to complete another raise” following a “challenging period”. It cited “cashflow challenges and very large competitors strangling growth”.

But speaking to The Grocer, Harry Thuillier said this had been “perhaps too strongly worded”. Competitors had, in fact, helped growth by expanding the category as a whole.”In January, Breyers and Halo Top both launched in the UK and our sales that month were higher than they’d ever been before,” he added.

“I think we might have been going a bit heavy with investors. We didn’t want them having the opportunity to sell and not taking it because we had given them a bit of a PR spin.

“We secured a loan, privately, mostly through current investors, of around £500k. That comfortably keeps us going with regards to still being able fulfil sales at the current trajectory.”

Oppo has completed three previous crowdfunding campaigns to raise capital, securing more than £800k in total since early 2015. Most recently, the pair raised a £350k cash injection January 2017 on the Seedrs platform.

Sales in Europe have performed well, added the co-founder and director, meaning the business had surpassed forecasts and needed a cash injection.

“Month-on-month we are five times what we were doing this time last year and that has its own challenges in terms of paying for production, ingredients, the supply chain, fulfilling sales,” he said.

“Because we are higher than forecast we’ve had to take more debt in order to fund the sales we are getting both in the uk, from our current supermarket customers but also through our new products, and in Europe, where sales are also going well in in Germany, Netherlands, Belgium, the Nordic regions. Because that’s also higher than forecast we needed more cash.

“In the short term we are doing that with debt, but in the slightly longer term we will be doing that with equity fundraising, which is purely for working capital. Year-on-year since launch, we have grown three times each time and this year is no different.”

Shareholders from Oppo’s previous crowdfunding rounds have been offered a chance to sell shares back for around £3 per share. Investors bought equity at £1.41 and later at £2.85 a share. The planned share buy-back is still set to go ahead “imminently”.

After the company warned of a shortage of working capital, one shareholder said: “I was quite surprised to hear that because they’ve been doing really well. It looks they’ve been growing too quickly. Last year they started in four countries, two retailers and launched a new product. With the £350k funding they raised last time - that was definitely not enough.”