How deep were the supermarket price cuts? 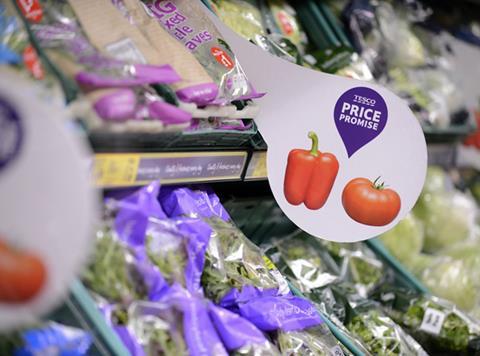 The latest Grocer Price Index signalled an end to the era of supermarket deflation as prices in February rose again on an annual basis after two and a half years of price cuts. But how deep were the cuts?

The final month before the Grocer Price Index starting showing annual deflation was the month to 1 May 2015 – every subsequent month up to the month to 1 March 2017 has shown supermarket prices in annual decline.

These figures therefore show that despite the return of inflation last month, food prices remain 5.24% lower than they were back in 2014.

There have been plenty of headlines on how the supermarkets will cope with rising prices, while maintaining their price profile against low-cost competitors.

Clearly not all of the 5.2% of price cuts have been driven by external deflationary pressures – a good measure is due to active price cutting by the supermarkets to hold on to market share in the face of the mounting threat of the German discounters.

But the fact that shelf prices remain more than 5% lower than they were last year suggests there is more room for prices to rise over the coming months before consumers are no longer able to absorb higher costs.

The level of price rises that will send shoppers into the arms of the discounters is more of an imponderable.

On a category basis, the biggest price drop seen over the era of deflation is in the deli category – down 14.5% over the period, though as the smallest category in the GPI deli is subject to inherent price volatility.

On an individual basis the biggest price cutter since May 2015 has been Tesco, with prices dropping by 5.6% over the period.

Asda prioritised profitability under Andy Clarke rather than chasing sales volumes and therefore its prices are down just 2.9% over the deflationary period.

However, Asda did have the strongest pricing position heading into May 2015 and maintains that position today – currently indexed at 108.7 compared to 111.7 at Tesco, 112.5 for Sainsbury’s and 113.1 at Morrisons.

Here’s the full breakdown of the category changes (across the big four supermarkets) from the start of grocery deflation in May 2014 to the end of the period last month.