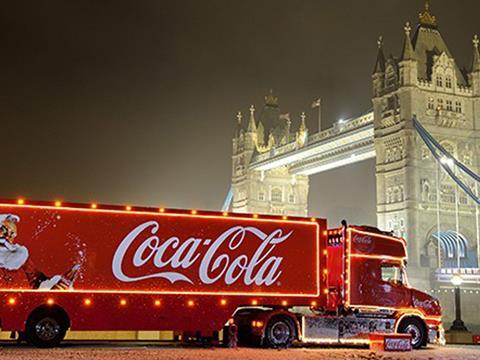 The Coke Christmas truck on tour around London

Coca-Cola’s Christmas truck tour should be banned, according to an article published in the British Medical Journal today.

According to Robin Ireland, director of Food Active, a group set up by public health directors to tackle obesity, and John Ashton, a public health consultant in Liverpool, the company was “hijacking Christmas by bringing false gifts of bad teeth and weight problems to our children”.

The pair also warned of the damage being done by press coverage of the tour in the North West of England in which children were given a free can of the soft drink, with 33.8% of 10 to 11-year-olds in the area overweight or obese and 33.4% of five-year-olds having tooth decay.

“The path of associating unhealthy products with health, wellbeing, and healthy lifestyles is one that has been well trodden down the years by the tobacco industry,” the article said.

“The lessons have not been lost on Coca-Cola. In fact, you could argue that Coca-Cola started even earlier than tobacco. At Christmas, Coca-Cola’s marketing goes into overdrive as newspapers across the country regurgitate press releases for its Christmas truck tour, with advertorials promoting the truck as a Christmas tradition. And of course the truck is just the latest of Coca-Cola’s campaigns to become a holiday brand and, indeed, to help brand Santa Claus himself.”

Coca-Cola strongly defended the use of the truck in its marketing.

“We had a really positive response from consumers to last year’s Christmas truck tour, As part of the experience, people could enjoy a small 150ml can of Coca-Cola Classic or one of our two no sugar options - Diet Coke or Coca-Cola Zero Sugar. We operate the tour in line with our responsible marketing policy and we do not provide drinks to under-12s unless their parent or guardian is present and happy for us to do so,” said a spokeswoman.

“The Coca-Cola Christmas truck tour began in 2011. Looking at the data referenced by the BMJ opinion piece shows that the dental health of children in the North West has been consistently improving since 2008 and that childhood obesity is lower than at any time since 2010. It is therefore difficult to understand why they think banning the Coca-Cola Christmas truck will improve public health in the region. The fact is, as government data shows, sugar intake from soft drinks by both children and teenagers continues to decline and consumption of full-sugar soft drinks in general has fallen by 44% since 2004. We will continue to take actions to help people to reduce the sugar they consume from our range of drinks, but the evidence suggests the current focus on sugar and soft drinks alone will not address the problem.”