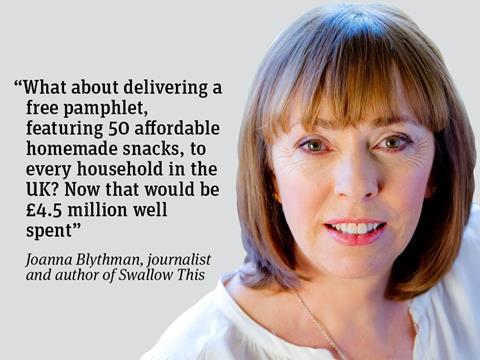 Like oiling a lawnmower that’s rusted up in the garden shed, they crank the same patently ineffective dietetic advice to life. They recommend nutrient-light stodge, such as crumpets, rice cakes and crackers while they discourage the consumption of whole, nutrient-dense, full-fat foods like cheese and yoghurt that would actually sate growing children’s appetites.

They promote sugar-free jelly-water, artificial flavouring and colouring, gums, and artificial sweeteners (which research increasingly suggests are possibly even worse for causing weight gain than sugar). Frankly, anyone still spouting such dangerous drivel earns a place in the hall of infamy alongside those ‘experts’ who told us there was nothing inherently wrong with smoking, providing you restricted it to 20-a-day.

But it was great, though, to hear a counter blast to Public Health England’s supine appeasement of Big Food from outspoken Dan Parker, the successful advertising executive who once earned his living marketing food brands. He likens Big Food companies to Big Tobacco, exposing how the former is still working zealously to persuade us to consume more junk. His conclusion? “We need to particularly eat less unhealthy food that generally comes in a packet and has a logo on it and is generally owned by a very large multinational corporation.” Instead of perpetuating the fiction that junk is fine in small quantities, this is the message PHE should disseminate.

It has to be said that Britain has many parents and food writers who ignore government counsel and feed their children well. Their practical snack ideas based on real healthy ingredients could fire up the imagination of people who’ve got stuck in junk food habits. What about delivering a free pamphlet, featuring 50 affordable homemade snacks, to every household in the UK? That would be £4.5m well spent.