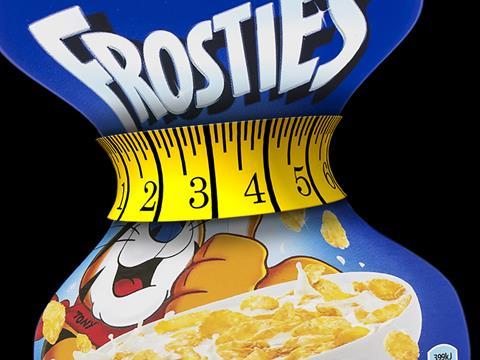 Kellogg’s is putting Tony the Tiger and Coco the Monkey on a diet as the war on sugar continues to strip millions of pounds out of the kids cereals market.

Sugar levels in Frosties and Coco Pops (currently 37% and 35%) will be cut by an unspecified amount. “We have lots more testing to do, and some technical barriers to overcome and only when we’re confident that shoppers will love the produce will we bring the food to market” said a Kellogg’s spokesman. But the intention is to remove 723 tonnes of sugar from its portfolio this year.

“While it’s our aspiration to lower sugar in our kid’s foods, if during testing consumers say they don’t want it, we won’t, the spokesman added. The two brands suffered a combined £5.8m loss last year [IRI 52 w/e 5 December 2015] as the cereals market fell by £71m. Coco Pops was hardest hit, down £3.7m, while Frosties fell £2.1m.

“We’re committed to offering people more of what they want in our foods, such as fibre and visible grains, and less of what they don’t want, such as salt and sugar,” said Kellogg’s commercial director for cereals Gareth Maguire.

Although Frosties and Coco Pops are two of the most sugary cereals on the market, Maguire said other factors were to blame for the decline: “We haven’t heard anything from consumers to suggest sugar is the reason behind the drop.”

Kellogg’s launched Reduced Sugar Frosties in 2004 but later pulled the variant after disappointing sales and criticism over its 25% sugar content and elevated salt levels. “That was a sugar reduction too soon. Consumers weren’t ready for it,” said Maguire. “We think the situation has changed.”

This week Waitrose announced plans to cut nearly two tonnes of sugar from its own-label cereals. Essential Corn Flakes, one of Waitrose’s top-selling cereals, will have 15% of its sugar removed and Honey Nut Corn Flakes and Choco Pops will undergo significant reductions.

“Breakfast is an essential part of a healthy lifestyle so Waitrose will continue to focus attention on cereals and other popular breakfast choices such as sweet pastries, smoothies, yoghurts and juices, so we really can help customers make a healthier choice,” said nutrition manager Moira Howie.

Waitrose claims to have removed seven tonnes of sugar from its own-label chilled juices in the past year, and a further 14.6 tonnes from its yoghurts.