Hipp Organic: plants have souls too 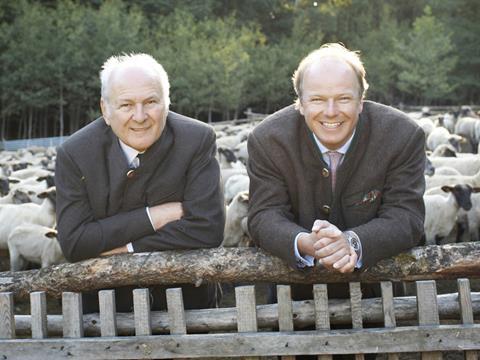 Stefan Hipp (right) took over the farm from his father Claus (left) in 2002.

Stefan Hipp takes organic farming seriously. So seriously that when two wolves crept into his farm in the middle of the day and dragged off two of his sheep - leaving nothing but a trail of wool - his solution wasn’t to buy a double-barrelled shotgun and a box of ammo. Instead he bought a donkey.

Donkeys are “naturally inclined” to protect sheep from predators because of their “territorial nature”, says Stefan. It’s just another sign of the ‘all-natural’ philosophy that steers the way every part of the farm is run.

But it also signals an originality of thinking that has been Hipp’s watchword since its inception. The brand was originally founded in 1899 by Joseph Hipp, whose wife Maria was struggling to breastfeed their twins, so they needed a supplement to fill the gap between breastmilk and ‘real food’. The result was the first rusk. It also pioneered organic production as early as 1956.

Hipp arrived in the UK in 1995 and has since launched over 150 Hipp products into the UK where it boasts sales of £50m. The UK is just one of the 57 countries the business operates in and global turnover is over £684m. But it remains a family-run business.

Managing partner Stefan, Joseph’s great grandson, believes the natural philosophy of the company could not be maintained if it wasn’t. “If you make decisions it is not important they are successful in one or two years,” he says. “If you believe in those visions, it’s fine if they are successful in five or 10 years.” But he insists Hipp’s long-term thinking doesn’t restrict its agility.

“Family businesses can decide very fast. If they are convinced of something they can do it, and usually they don’t make compromises.It’s very different to the big shareholding companies because they have a CEO, he has a contract for three years, and in those three years he has to show the best results. Then he might get another contract. But he doesn’t care about what happens in five or 10 years.” 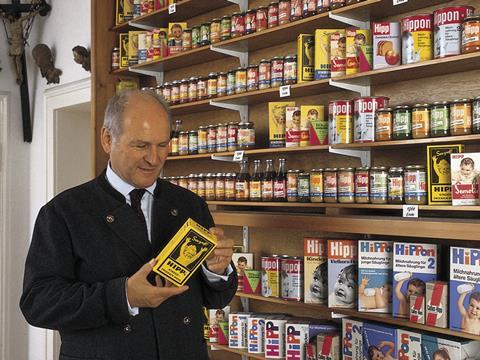 Claus Hipp with some of the brand’s original products

Family-run concerns are not as common in the baby category as you might think. Cow & Gate was first opened as a small grocery shop in 1771 by the Gates family, but in 2013 it was acquired by Danone. Ella’s Kitchen, founded by Ella’s dad Paul Lindley, was sold in May 2013 to US giant Hain Celestial for $103m. Meanwhile there’s Heinz and Nestlé baby ranges. Babies are big business.

But Hipp’s main stretch of land remains a 2,000-hectare farm, home to 1,000 cows, 600 sheep, four varieties of organic crops and a bad-ass donkey. Based in in the village of Podagi, in northern Poland, it’s Hipp’s second farm (its first was the family farm in Pfaffenhofen, Germany). When Stefan arrived 14 years ago, the buildings were in a state of disrepair. Turning it into a place where organic produce could thrive took time and resources. Hipp says a CEO of a big corporation would find it hard to justify, simply because it takes a farm three years of using organic methods to be certified organic.

The latest figures from the Soil Association - with organic sales growing for a third consecutive year to top £2bn by the end of 2016, are encouraging for Hipp. But there are inherent challenges with organic farming itself, like maintaining yield despite not being able to spray pesticides. So Hipp has found other remedies. 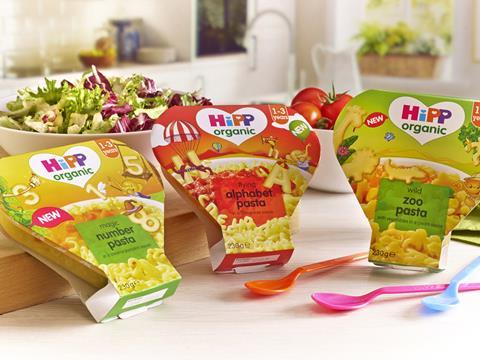 Planting clover first gets rid of the weeds, as the plant is strong and fights for the sunlight. To tackle pesky carrot flies he uses onions in every third row of carrots planted as they don’t like the smell. But even Hipp has a limit on how much he tries to control nature.

“If we change the process of creation because of greed and the desire to have more without considering the damage we cause in the process, we are doing wrong,” he says. “Plants have souls”.

Stefan hopes his 11-year-old daughter, who stays at the farm in Elblag during the summer, will take on the business and share the family vision.

“She’s very much interested in the farm and farming,” says Stefan. “I grew up in the company, with the products, and with the idea of doing it for a while and then passing it on to the next generation. This is our family philosophy; this is our tradition. It’s our passion.”