Fashion is cyclical. So are concepts of beauty. If one look can be said to have defined the 1990s, it is ‘heroin chic’ - see the pale skin, dark-ringed eyes and angular frames of Kate Moss, Jaime King, or Uma Therman as smack-snorting moll Mia Wallace in Pulp Fiction.

It’s come full circle. Size zeros might still rule the catwalks but a new ideal is emerging in gyms and on social media: tanned skin, rippling abs and thighs that would make a racehorse jealous. It’s now in fashion to be fit.

Superfit, that is. Bloggers such as Massy Arias and Anna Victoria have lured millions to their Instagram feeds with images to inspire (or guilt trip) followers into working out. Think swinging kettlebells, swaying punchbags and sweating torsos, yoga poses and fruit & veg smoothies.

This is heroine chic. So how is the male-dominated sports nutrition market, which has seen grocery sales surge 10.5% on volumes up 14.5% [Kantar Worldpanel 52 w/e 19 June 2016] adapting to cater for this new breed of aspiring superwomen? And what other factors are shaping the market?

One thing’s for sure: sports nutrition is no longer just about muscularity: bodybuilders looking for more bulge to their biceps. “As a brand we know the market a few years ago was 15% female,” says Chay Watkins, marketing director for Sci-Mx. “Now it’s between 25 and 30%. We can’t just shrink and pink our products to appeal to these consumers. We need a new approach.” 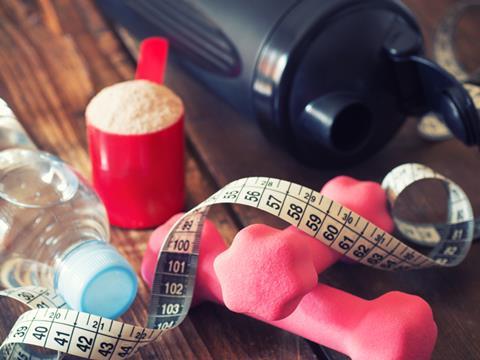 It’s a challenge because sports nutrition is still a decidedly butch category, dominated by names sounding more like lethal weapons than food (see Grenade, Shred-X, Dymatize). “Sports nutrition has now worked its way from the core bodybuilding and performance market, into mainstream consumers seeking out a healthier and more active lifestyle,” says Paul Donegan, MD of Kinetica Sports. “The broadening of the sports nutrition consumer base over the past 12 months has created more demand for more accessible, convenient products from male and females - impacting on the ranges now available.”

Sales are set to pass the £100m mark for the first time in the next year - though it’s worth noting the true size of the market is much bigger, as these numbers do not include online specialists - driven by strong growth in protein powders and convenience-orientated products such as flapjacks and bars.

“Essentially it’s about having the right format for the right shopper in the right place,” says Craig Percival, marketing director for nutrition at GSK, owner of Maxinutrition. “There are three pillars to this: the first is about unlocking convenience and impulse. We know 70% of recruitment into the wider category comes through RTDs and bars. Forty-one per cent of adults are looking for healthy alternatives. Second it’s about demystifying the category because we know two of the key barriers are relevance and confusion. The third point is about having the right nutritionals with the right taste.”

“There’s a huge job to be done on price point. Getting under the £2 price point is crucial”

Future growth will depend on brands broadening their appeal, says Watkins. “We are currently going through a rebrand,” he says pointing to Sci-Mx’s new Pro2Go Caramel Crisp (see left), which is the first NPD under the new livery. “There will be a massive push in impulse secondary sitings. The two key factors here are footfall and price point. There’s a huge job to be done on price point. We know consumers are prepared to pay more for healthy snacks but getting under the £2 price point will be absolutely crucial.” 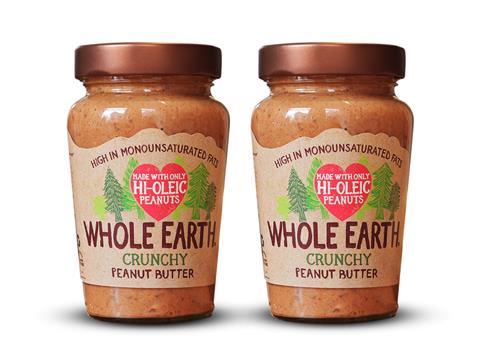 You’ll spot a theme in the following launches: a preponderance of nuts and oats, marketed on their nutritional benefits for sports nuts. Take this latest launch (rsp: £2.68/340g) from Whole Earth, sponsor of the Man vs Horse endurance race. By using only hi-oleic peanuts, which contain about 30% more monounsaturated fat than normal peanuts, Whole Earth is looking to attract consumers who want a natural protein hit but want to keep on top of their cholesterol levels. Heart UK approved. 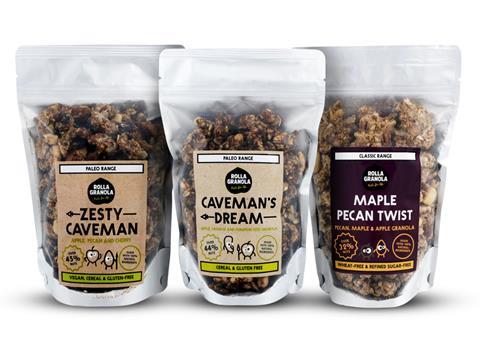 The paleo movement, founded in the Crossfit gyms of the US, is now in full swing this side of the pond. Rollagranola claims its three-strong range (rsp: £5.80) - mixes of nuts, seeds, fruit and spices with no cereal, gluten or refined sugar - provides the modern caveman or woman with a perfect, protein-packed pre-workout start to the day. 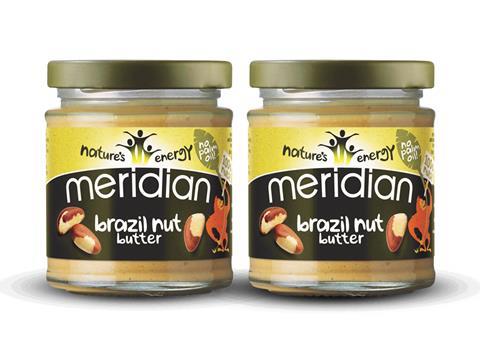 Launched with Macadamia and Pecan Butters to cash in on the build-up to Rio 2016, Meridian says its Brazil Nut Butter (rsp: 6.99/170g) has had a hot summer thanks to its high protein content (14.6g per 100g) and the growing use of nut butters among active types. It says sales of its kilo packs of peanut butter are booming through Virgin Gyms. 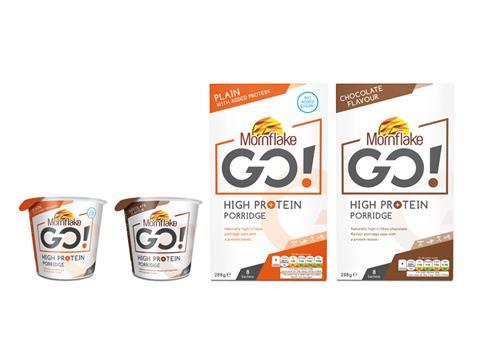 Mornflake is going for gym bunnies with its latest launch Go! (rsp: £1.39/70g pot or £2.29/eight sachets). “The protein market is set to reach £8bn by 2017,” says marketing manager Richard Jones. “Health is a key driver.” Go! comes in no-added-sugar and chocolate variants and contains up to 22% protein.

Proof of the importance of hitting lower price points and broadening appeal can be seen in the meteoric growth of Nakd, now widely sold at 75p. Bounce Energy Balls, up 52.8% on volumes up 63.6%, thanks in part to big distribution gains in retailers including WH Smith and Boots (the latter features the brand in its lunchtime meal deals)., is another case in point.

That Bounce doesn’t even define itself as a sports nutrition product - rather a wholefood snack - is significant. A growing number of healthy, wholefood brands are muscling in on the sports market by appealing to consumers put off by the technical language used by sports nutrition brands or the high level of processing needed to make their products.

Nut butter is at the vanguard of this wholefood revolution. Brands are marketing themselves as athlete fuel thanks to nuts’ naturally high protein and low sugar levels. Sun Pat recently sponsored running Twitter feed UKRunChat and Whole Earth sponsors the Man v Horse endurance race and has teamed up with Paralympic triathlete Faye McClelland.

“There’s a growing interest in eating natural, ‘clean’ foods that are free from preservatives and additives,” says Pippa Murray, founder of nut butter brand Pip & Nut, which has teamed up with brands including Nike, and Sweaty Betty to push its 30g squeeze packs (listed by Sainsbury’s). “Foods with high (natural) fat and low carb content have also become increasingly popular, which has benefited products such as nut butters.”

It’s more than just nut butter. Plenish, for example, is a new cold-pressed juice and nut milk brand that’s enlisted yoga instructor and blogger Jessica Skye to appeal to yogis. “Our ranges are designed by experts to proactively fuel your body and keep you top of your game,” says founder Kara Rosen. “Our cold-pressed juices contain over half a kilo of organic produce in each bottle.” 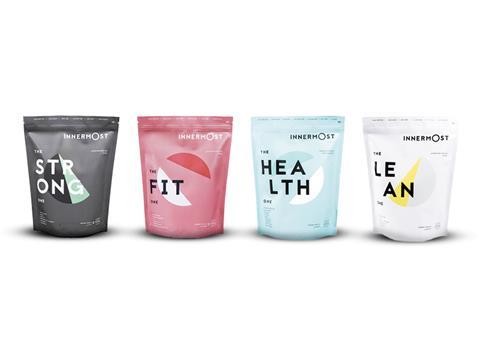 You don’t often see a pink protein blend pack in the butch world of sports nutrition. But the sector is no longer the sole preserve of bodybuilders looking for more bulge to their biceps, says Innermost founder Shivraj Bassi: “Innermost was founded to challenge the status quo and offer a real alternative to a large group of under-served consumers within the sector.” The range comprises four products (rsp:£24/300g): Strong, for muscle gain; Fit, for energy; Health, for vitality; and Lean for weight loss. 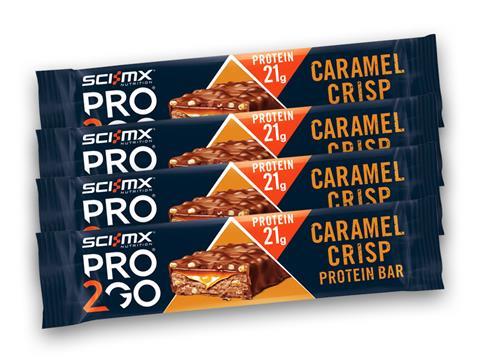 Sci-Mx has always been on the more butch side of the sector, calling on punters to ‘shake it, smash it, boss it.’ This chocolate-topped triple deck sandwich of caramel, nougat and soy crispies (rsp: £2.29) is a new departure. The machismo has been dialled back to broaden appeal, but the bar still packs a hefty 21g of protein. 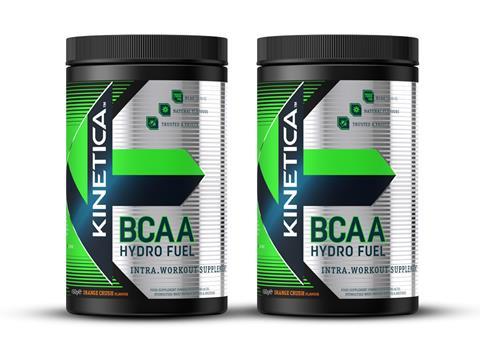 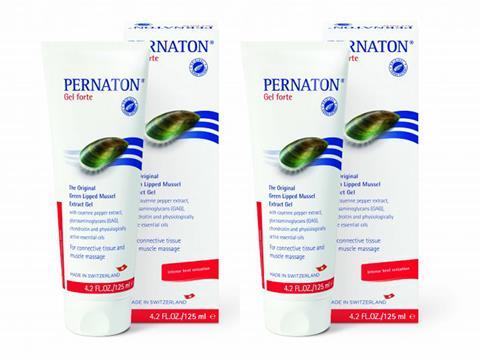 OK, you can’t eat gel but this is still significant. With Brits getting active, some say muscle recovery products could be an opportunity. Gel Forte (rsp: £11.95/125ml) contains green lipped mussel extract - rich in omega-3 fatty acids and glycosaminoglycans - to ease aching muscles, and cayenne pepper to warm the skin and aid circulation.

There are two things to note here. First, the gender-neutral branding and targeting of active types are a clear departure from the butch approach of sports nutrition’s big brands, likely to appeal more to women. Second, such products carry a healthy premium. Plenish’s new Water+ range of probiotic drinks sells for £2.29 per 330ml. Its cold-pressed juices are £4.95 for 250ml.

It’s not just products aimed at yummy mummies and yogis either. Punters will pay more for products with added health and fitness credentials, particularly when it comes to the addition of protein to existing recipes. For example, the Mars and Snickers Protein Bars launched in May carry an rsp of £2.19. Standard versions sell for as little as 40p each.

“Consumers are willing to pay a premium for products specifically designed to aid their sporting activity,” says Nyree Chambers, head of marketing for Grace Foods UK, owner of the Nurishment Active RTD brand. “Consumers will also pay a premium for convenience. Ready to drink, high protein products are ideally placed to meet their demands.”

Sustainable growth in powders for grocers will not come from competing with Amazon on price, say experts. It depends on brands with a broader appeal. “Many existing companies want to appeal to a broader demographic, but their focus on innovation has led to increasingly large and confusing ranges,” says Shivraj Bassi, founder of Innermost (see Innovations p48). “Innermost was founded to challenge the status quo and offer a real alternative to an increasingly large group who represent the next growth opportunity.”

In other words, heroine chic could be about to go mainstream.