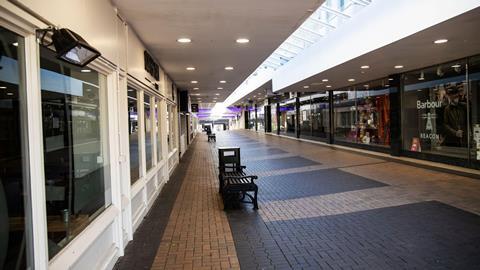 After lockdown II, what now for the rent debt crisis?

As the end of protections for tenants looms, retailers and landlords are at loggerheads over what next, and a solution appears no nearer

The nervous but unified front landlord and retail chiefs have presented during the pandemic is showing signs of cracking.

Since the first national lockdown in spring, industry bodies on both sides have been united in lobbying the government for a grant scheme to pay some of the mounting rent debt.

Instead, the government has put the crisis off by banning landlords from evicting or recovering rent debt from commercial tenants, and hoping the two can sort it out themselves in the meantime.

It has proved a strategy of questionable success. Last week, BRC CEO Helen Dickinson said many retailers would still be unable to pay and were “holding their breath” for the government to announce an extension of the protections from 1 January, when they are due to expire.

But that would take them into their fourth quarter, a move quickly slammed as “unsustainable” by British Property Federation CEO Melanie Leech, signalling the increasingly public polarisation of the two camps.

So, with a month to go, what exactly do the two sides want and expect to happen from 1 January? And is there any remaining common ground, or have options run out?

One point on which both still agree is the need for a fiscal support package from the government, such as the ‘property bounceback grant’ proposed in detail by the BRC, BPF and UKHospitality this summer.

With so many shops closed in Wales, England and Scotland’s second lockdown, the case for such a grant is arguably more compelling than ever. It has left October’s sales growth “a distant memory for many retailers”, says Dickinson.

Worse still is the situation for hospitality businesses, facing the prospect of remaining closed under the new tier system from 2 December. “The shadow of rent debt continues to hang over the sector from the first lockdown,” says UKHospitality CEO Kate Nicholls. “In the face of a restrictive tier system for this festive season, this issue unresolved will continue to cast a shadow over the hospitality sector for the foreseeable future.”

UKHospitality has come up with a new proposal, under which the government would offer tax reliefs for landlords who “forgive” debt and low-cost, long-term loans or bonds for businesses needing rent support.

But the BRC and seemingly the BPF have all but given up on fiscal support. As long ago as summer, the government indicated “that’s not happening – give us some non-fiscal things you want”, says BRC property policy adviser Dominic Curran.

“I think they should [launch a grant] but I’m not pinning my hopes on them doing it,” agrees the BPF’s Leech. “What we’ve heard pretty consistently is ‘you need to find the solutions to the exit strategy and moratoriums [protections] elsewhere’.”

Retail’s non-fiscal proposals, such as giving tenants the right to trigger rent reviews, were also one-by-one dismissed, leaving the moratoriums “the only things left on the table”, says Curran.

Hence both the BRC and UKHospitality are demanding an extension – the latter for another six months, no less.

Leech concedes a lockdown is “not the pre-Christmas period the retail or hospitality sector would have wanted”.

But she also highlights an elephant in the room: commercial rent debt has been growing at a rate of £1.5bn for every quarter the protections have been in place. It will stand at £4.5bn by year end, according to analysis from Remit Consulting.

By 35 days into the current quarter, which started in September, a third of retail’s rent bill for the period was still to be collected, while just over half of leisure’s remained outstanding, says Remit.

“The moratoriums can’t go on forever,” says Leech. “We’re nine months in now and depending on the situation at the end of December, it will be a year. That doesn’t feel like a short-term measure. Investors are starting to say ‘we have other places we can put our money and you need to address this situation’.

“That doesn’t mean landlords have no obligation to help but it does mean we have to get back to a kind of normality, where investors can rely on the proposition they thought they’d signed up to, and want to sign up to in the future.”

The moratoriums cover eviction for non-rent payment; commercial rent arrears recovery, which can be used to send in bailiffs and potentially seize stock; and statutory demands or winding-up petitions.

Ending all three probably would result in some retailers suddenly finding more money to pay the bill, says Curran. But it would also result in a “wave of store closures and CVAs and administrations and job losses from 1 January” where retailers don’t have the funds. That would be disastrous for both retail and landlords, he argues.

It’s also unlikely to be the government’s chosen course, Curran thinks. Instead, he predicts ministers will extend the protections against commercial rent arrears recovery and winding-up orders or statutory demands for another quarter, but give landlords back the power to evict.

The government will see it as a way of redressing the balance to landlords by doing “the least-worst thing for tenants” Curran argues.

In practice, it could be just that, providing a workable compromise for many businesses. Where a retailer looks unlikely to ever be able to pay rent again, and the debt therefore is truly unsustainable, the landlord will be able to get rid of them.

But such a decision will not be taken lightly given the property vacancy rates, which stood at 13.2% in the third quarter, up from 12.4% in Q2, according to the BRC and Local Data Company’s Vacancy Monitor.

Therefore, where it does look possible a retailer may be able to make up for lost trading over time, landlords will be encouraged to wait – and the protections that remain will stop them becoming an “existential threat” in the meantime.

“All ending the ban on lease forfeiture will do is allow landlords to find more productive uses for property on the assumption that tenants won’t be paying rent in the foreseeable future,” says Curran. In most areas it would “probably not be that bad for tenants”.

Leech also accepts it as a compromise. “We know there has to be an exit strategy, not just an on/off switch decision,” she says. “Anything that can be done to incentivise conversations, but allows them to happen in a situation that’s not do or die, for either side, I think has to be welcomed.”

Curran’s cautious acceptance of the notion does have a caveat. In the most prime locations, where it is easier for landlords to find new tenants, the threat of eviction will be higher. “Those are also probably the sites occupiers would like to keep because that’s where the profit is,” he says.

Nevertheless, should his 1 January prediction prove accurate, many retailers can stop holding their breath on rent, for another quarter at least.