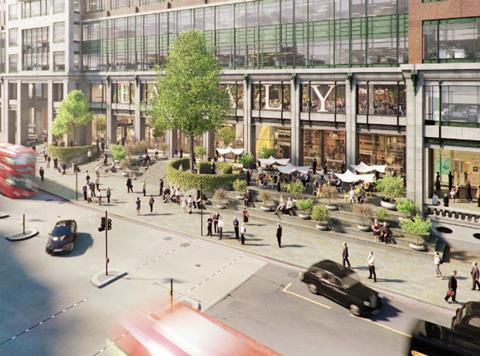 A CGI of Eataly’s new development in London’s Broadgate

Italian food hall brand Eataly has confirmed it will open its first UK site at London’s Broadgate development, near Liverpool Street Station, in 2020.

A 42,000 sq ft branch including restaurants and bars will occupy the ground and first floors of 135 Bishopsgate, formerly the premises of the Royal Bank of Scotland.

The news was announced jointly by Eataly and the property’s owner, British Land, with a statement saying a lease had been signed.

It said: ‘With a selection of the best Italian products, restaurants, bars, quick services, exciting on-site production laboratories, and a cooking school, Eataly will add to the already popular restaurant and bar offering at Broadgate.’

Eataly was founded in 2004, combining restaurants and food retail, and now has 40 branches in 12 countries, generating sales of roughly €400m in the last year, according to the firm.

Eataly CEO Luca Baffigo said: “Visiting Borough Market before opening our first Eataly in Italy was a source of great inspiration for our concept. This is why opening a place in London where people can buy, eat and learn is a very important and exciting milestone for us. Being able to bring our model into a place that is so significant for us fills us with satisfaction and stimulates us to create in London a wonderful multifunctional experience.”

Claire Barber, British Land’s head of central London retail and Meadowhall, said: “Eataly’s decision to take space at Broadgate is a fantastic endorsement of British Land’s strategy to create a vibrant, world-class neighbourhood at the campus.”