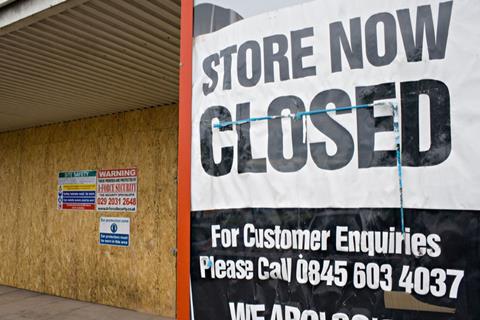 Many retailers have just weeks to survive without a rental support scheme from the government, according to industry leaders.

Companies that were viable before the coronavirus outbreak will be forced to file for administration if the government doesn’t step in and pay rents, according to a letter to Chancellor Rishi Sunak from the British Retail Consortium and the British Property Federation.

The letter welcomes the support provided so far, including the coronavirus jobs retention scheme and 100% business rates relief. But it warns that it still leaves two-thirds of property costs payable and says intervention is needed by both retailers and landlords.

“The scale of the crisis facing the retail sector is grave,” it says. “While sales may have increased in certain sub-sectors, such as food retailing and household items, these are temporary in nature, and the majority of businesses are experiencing dramatic falls in turnover of up to 100%. The same is true for businesses in many other sectors.

“Many of these businesses operate on small profit margins - the retail sector’s average profit margin had fallen from 4% in 2013 to 2.5% prior to the start of the crisis. Most operators do not have significant cash reserves to fall back upon given the scale of fixed costs that they continue to have to meet. For them, survival is now being measured in weeks rather than years.”

The government last month banned landlords from evicting commercial tenants for missing rent payments for the next three months. But landlords are attempting to ‘strong-arm’ businesses into paying by issuing winding-up orders, The Telegraph reported at the weekend. Poundstretcher and Matalan are among those to have been threatened with the orders, according to the newspaper.

“We have come together, as voices of both commercial tenants and landlords, to propose that the government introduces a scheme of rental support for the space that has in effect been furloughed, just as staff have been; focusing support on occupiers will then bring the relief to landlords (and their lenders) upon whose success they depend.

“The furloughed space grant scheme would mirror similar schemes being introduced in Denmark and other European countries, whereby the state supports the fixed costs of businesses that have experienced dramatic falls in turnover due to the coronavirus outbreak.”

Under the recommendations, businesses would submit forecasts of their actual and expected drop in turnover for the lockdown period, and their fixed property costs. The government would then meet the costs on a sliding scale. A 40%-60% drop in turnover would see the government pay 25% of the costs, rising to 50% of costs for a 60%-80% drop, 80% for a 80%-99% drop and 100% for businesses not trading at all.

Leech said: “Whilst we welcome the range of measures the government has already put in place, and many lenders and property owners have already agreed significant measures to support their customers, there remains a real risk that businesses that were fundamentally sound prior to the start of the outbreak will not be able to survive without further targeted support from government. The interests of property owners, their lenders and their tenants are aligned in asking the Chancellor to introduce additional support measures similar to those adopted in other European countries, to support those in greatest need and unable to access other routes for urgent assistance in meeting their financial commitments including rent and service charges.”