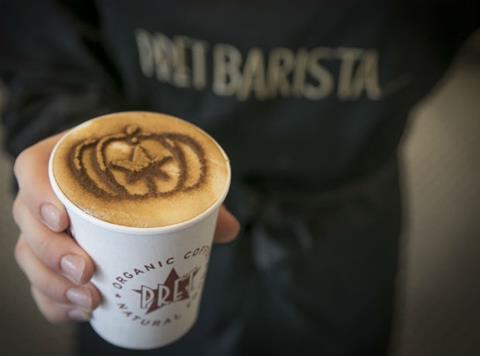 Pret’s Pumpkin Spice Flat White is popular in The States

The pumpkin spice flat white, which costs £2.75, is already a popular choice in the US, along with turmeric lattes.

It has also added two new vegan sandwich options following a Facebook vote to bring back the popular Chef’s Specials.

Pret’s avo, olives & toms baguette, as well as its avocado & chipotle chickpeas salad wrap, will be available in-store for a month from 3 October.

Other autumnal additions include a ham hock & sprout macaroni cheese, and a chicken, basil & red pepper toastie for £5.50 and £4.25 respectively.

The new menu also sees the return of meaty soups such as coconut chicken curry and pork & lentil ragu.

This follows Costa’s launch of its autumnal menu on 1 September with its first soups to expand into hot food-to-go options.