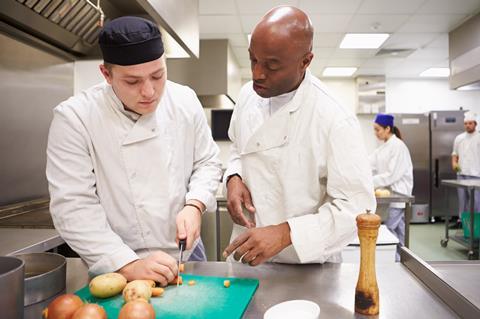 There is no doubt that lots of prisoners, currently serving sentences, would make great drivers, butchers, bakers and chefs

Suddenly, businesses are looking to employ people from prison to fill gaps caused by the current recruitment crisis. It is great to hear that HR executives are willing to abandon their ban on applicants with a prison record. If this represents a permanent shift in attitude it will significantly reduce the number of prisoners who reoffend and will cut the vast cost of our prosecution and prison service.

At Timpson we started recruiting ex-offenders 20 years ago after my son James attended a function at Thorn Cross open prison near Warrington. James was so impressed with Matt, the inmate who showed him round, he said “Get in touch when you get out and we’ll give you a job”. Matt is still with us 19 years later and we now have about 600 other colleagues who experienced time in prison.

Over 60% of prison leavers reoffend within two years of release, a figure that reduces to under 20% for those with a job. It isn’t easy to get your life back on track when you have lost family ties, have no financial security and no place to live. A job is the vital link that helps put things back together. But we didn’t just provide a bit of work experience or a temporary role: security only comes from a full-time job. Everyone who joins us from prison has the same pay and opportunities as every other new colleague.

Since 2002, we have learnt, through experience, how to make prison recruitment an all-round success. We now know much more about working with prisons, and how to pick the ex-offenders who will be successful. We use exactly the same recruitment criteria as apply to all other candidates – we pick them on their personality. We look for busy, keen, helpful, outgoing and kind people who are ambitious. Drug dealers are often successful – they are very commercial! We are not bothered what crime has been committed, but we don’t employ sex offenders (due to concerns about meeting with the public, serving children, taking photos etc) and those convicted for arson (our insurance company is not keen).

We’ve also learned how to help our colleagues to give the extra support needed by new starters from prison. The most vital support comes in the weeks after release. Sometimes they help with housing, often a loan, always the personal mentoring of their area manager and apprentice trainer. The thing that makes the real difference is being trusted to do the job – upside-down management is good for mental wellbeing.

The scheme has been a great success but, inevitably, we have made a few mistakes along the way. Most of the horror stories happened in the early days when we recruited some of the toughest characters who frankly were too naughty to be employees – some ran off with the till and one was so talented she became an area manager before running amok with her company credit card. But these incidents are few and far between – there are many more incidents of dishonesty involving those we employ from the general public.

There is no doubt that lots of prisoners, currently serving sentences, would make great drivers, butchers, bakers and pastry chefs. Over the summer some of the chefs in our three busy pubs were recruited from prison. But the current lack of skills will not be solved overnight by HR managers tripping around the prison estate to plug their gap in applicants. There are approximately 85,000 people currently in prison and most won’t be available for work any time soon. You will usually have to wait for their release date. We recruit several ex-offenders who are released on temporary licence (day release) but that’s only possible when they are serving the last four months of their sentence.

Being realistic, probably no more than 5,000 of the those currently serving a prison sentence could immediately fill the current employment shortfall.

There is another, much simpler, solution. If companies were to change their policy on the employment of ex-offenders they would attract applications from those people who, currently, can only get a job if they lie on their application form. If HR departments are contemplating the employment of an ex-con to deal with our current crisis they can, forever, scrap their insistence on a clean criminal record.

There have been many unexpected consequences of Covid. The current labour shortage and consequent problems with stock deliveries and the availability of butchers are two of the many problems that have emerged. But there could be some good news – if the current talk about hiring from prison gains long-term acceptance throughout industry it will give offenders a second chance and cut the enormous current costs of re-offending. I have seen the evidence: our reoffending rate is less than 2%.