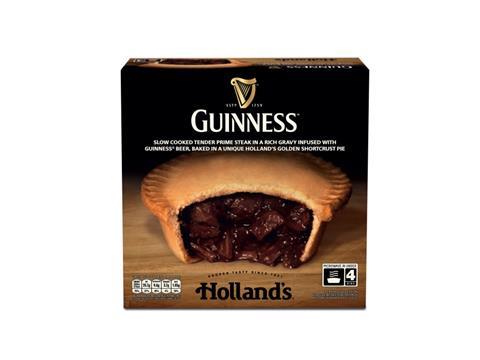 Lancashire baker Holland’s has partnered with Diageo to launch a Steak & Guinness pie.

The shortcrust pie (rsp: £2), which rolled out to Tesco last week, contains “chunks of slow-cooked prime steak in a rich gravy infused with Guinness beer” and will be stocked by other retailers later in the year.

It is the second licensed launch from Holland’s, which partnered with ITV in 2010 to launch limited-edition pies for the 50th anniversary of Coronation Street. The baker, part of 2 Sisters, said it was always looking out for new licensing opportunities.

A steak & Guinness pie was previously produced by WA Turner under the Six Hungry Sons brand but withdrawn in 2012.