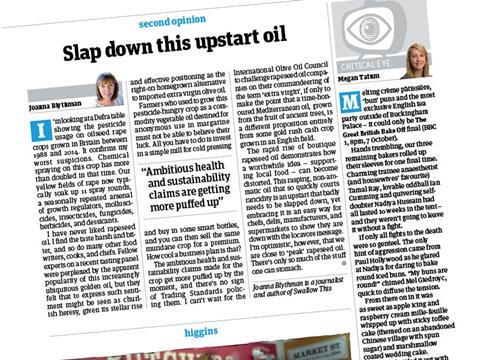 Sir, I have to take Joanna Blythman to task on her vendetta against rapeseed oil (Second Opinion, 10 October, p25). I personally helped create the cold-pressed rapeseed oil sector over 10 years ago, an innovation that has seen Farrington’s Mellow Yellow remain a brand leader in the market. Our brand would not have stood the test of time if it did not deliver an overall healthier, tastier culinary oil that competes with the best the Mediterranean has to offer.

As a LEAF farmer of over 20 years, I grow our crops to LEAF Marque standards, a farming system that looks at whole farm practise for producing healthy sustainable food, giving our customers the assurance that we are passionate about the environment we live and work in. For example I encourage natural predators to eat slugs through soil management and wildlife habitats; I use companion cropping to confuse cabbage stem flea beetles and other pests, whilst also being a source of nitrogen to the crop; I use a nine year crop rotation to reduce disease and weed pressure; I have established pollen and nectar rich habitats to increase the number of pollinating insects that also pollinate my rapeseed. I also use modern chemistry as part of my farming armoury when all else fails, to ensure we produce a healthy crop. Even Ms Blytham wrote in The Guardian, 7th October how the Soil Association in their organic farming protocol, allow pesticide use when a non-chemical approach has failed. And just to assure Ms Blythman, our seed is analysed for any traces of pesticide residues before we press a single seed.

Extra virgin olive oil is a good product that has its place, however cold-pressed rapeseed oil easily holds its own on all fronts. Farrington’s Mellow Yellow (no mention of extra virgin on our bottle) does not go rancid - I know, because I have tested it. Like olive oil, Mellow Yellow is a great source of mono-unsaturated fat, but it has 60% less satfat and 10 times more omega-3, which is preserved by the natural vitamin E and is in perfect dietary balance with omega-6. Furthermore the antioxidant carotenoid content, around five times higher than olive oil, is becoming a major focus for health-related research, in addition to its properties as a natural preservative of the oil.

There is also the cholesterol-reducing plant sterol content, over double that of olive oil (I have tested it) and shown to be more effective than olive oil in reducing LDL-cholesterol levels [Ellegard et al 2005]. Or one could compare vitamin k, again in cold-pressed rapeseed oil at a higher content than olive oil.

I am proud to be part of a thriving industry providing jobs in rural areas, something Ms Blythman perversely sees as a something I should be embarrassed about. Come to our farm Joanna, see for yourself the good work we and many UK farmers do day-in, day-out.