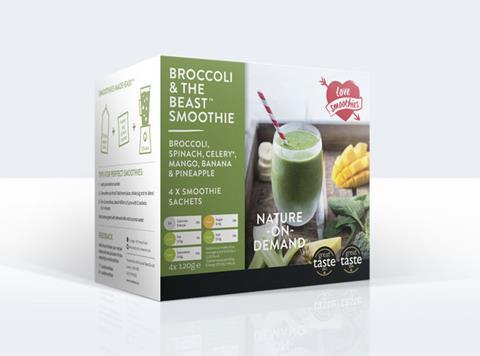 A frozen smoothie brand co-developed by chefs from Heston Blumenthal’s Fat Duck restaurant has won a listing in Sainsbury’s.

Three varieties of Love Smoothies go into the retailer on 27 February: Pash ‘n’ Shoot, Broccoli & The Beast, and Red, White & Blueberry. The 4x120g packs (rsp: TBC) contain a mix of frozen fruit and veg pieces and purée, which are made into a smoothie by blending with apple juice.

The three flavours, which are new, were created with Stefan Cosser from Food Innovation Solutions, who was previously senior development chef at the Fat Duck. Earlier flavours were developed with Michelin-starred Dominic Chapman, another alumnus of the Berkshire restaurant.

“Love Smoothies takes the hassle out of smoothie preparation by giving you the best, freshest ingredients in one handy pouch,” said Canterbury. “We work with some fantastic athletes and are excited that now anyone will be able to fuel themselves for the day with the exact same smoothies that are recommended by sports nutritionists and by the likes of Harlequins, QPR and British Canoeing.

“If you’ve ever wondered what to eat before running a marathon or simply hitting the gym or your weekly zumba session, now you can give your body what it needs in terms of both energy or wind down.”