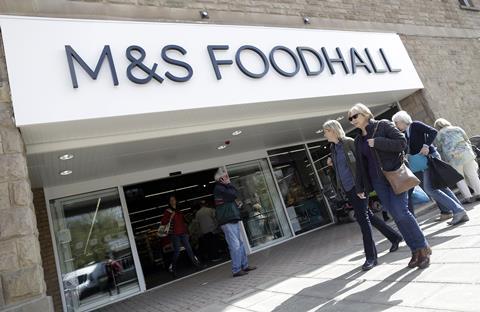 The aim is to offer ‘hot hold’ in 100 stores, including both company-owned and franchises, said M&S head of new business Rebecca Tye

M&S aims to offer hot food including curries and rotisserie chickens from 100 stores, the company’s head of new business Rebecca Tye has said.

The range is designed to cater for breakfast, lunch or dinner, and also includes croissants, sausage rolls and wraps, kept in a self-service heated cabinet.

The ‘hot hold’ proposition first launched a year ago in the Waterside Simply Food branch at M&S’s head office in London’s Paddington. It is now in 44 company-owned branches.

Having ironed out teething problems, M&S was looking to grow the number to 100 including both company-owned stores and franchises, said Tye.

“One hundred is the ambition at the moment - that 100 stores shortly will have hot food,” she told The Grocer.

Tye described the plans at the recent IGD conference in London. “I think hot hold has been a real challenge for us in terms of getting quality that really satisfies our product development team, to packaging and even to where we position it in a store,” she said in a presentation.

“We’ve got it wrong several times over. However, this time we have really developed and innovated in hot hold and we have a really substantial offering, which pulls from some of our meals credentials and other credentials of our business.”

M&S food-to-go format lead Victoria Wilson told The Grocer: “It’s in company-owned stores at the moment. We’re rolling it out to franchise partners as well. You’ll see it in some railway stations in London and in hospitals. It’s a rollout programme, so it depends on the franchise partner, because they obviously have to get planning permission et cetera.”

Describing challenges of the trial in more detail, Tye said: “We’ve had several failed attempts. We hadn’t learned from people like Pret who put hot hold right where the sandwiches are.” Instead it might have been in a different part of the store “so people have already made their choice” when they arrived at it, Tye added.

Packaging had also been challenging “in terms of greasiness”.

M&S has franchise deals with Moto and BP for forecourts, SSP for railway stations, hospitals and airports and Compass Group for hospitals. On the high street, it opened M&S Simply Food concessions this year in two WH Smith stores, in Darlington and Sutton Coldfield.

An M&S spokeswoman said: “As we transform M&S Food, our strategy is to protect the magic and modernise the rest, and our food-to-go offering is definitely considered by many magic, with over two million sandwiches being sold a week.

“With the growth of the food-to-go market we recognise the importance of having a strong hot food offering, especially at this time of year. In our owned stores we’ve now opened 23 Marketplace counters and installed 44 ‘Hot Food’ pods. We continue to listen to customer feedback on our proposition.”