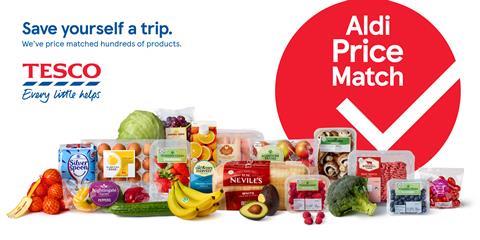 A complaint by Aldi about a Tesco ‘price match’ ad has been knocked back by the Advertising Standards Authority.

Aldi complained about a Tesco press ad which appeared last July, as the UK’s biggest supermarket ramped up its latest marketing assault on the discounter. The ad boasted: “Now we’ve added lots of big brands too”.

However, the ASA considered the ad to have made clear the brands had been added to an existing campaign, while consumers would be aware Aldi sold both brands and own-label. It took into account smaller print saying “hundreds” of products had been compared with “comparable” ones.

The watchdog decided consumers would understand Tesco’s price match claims did not apply to all of Aldi’s range and that brands had been matched against the same product “or in rare circumstances, the nearest comparable product at Aldi if the branded product was not available”.

The watchdog reviewed Tesco’s data and noted all branded products in the scheme were matched against the identical product at Aldi except in one instance where Aldi did not sell the brand.

“We considered that the ad made clear to consumers the price match was in relation to a selection of products rather than in relation to Aldi’s entire product range, and branded products would be matched with the same branded product where it was available at both stores,” said the watchdog. “We therefore concluded the ad was not likely to mislead.”

An Aldi spokesman said the business was “disappointed” with the ruling, adding: “Independent surveys like the Grocer 33 consistently show customers get the best value products by shopping at Aldi.”

It’s just the latest in a series of run-ins between the two supermarkets over advertising. In July 2019,  Aldi ads which compared its own-label products with branded ones at Tesco were deemed misleading by the ASA. Two months later, the watchdog found Tesco had misled consumers by using products “not widely available throughout Tesco stores” for the basis of a comparison.

The Grocer revealed the latest spat was on the cards last July, shortly after Tesco expanded the campaign to include 500 new branded and own-label products.

Tesco launched the campaign in March 2020. In February this year, Sainsbury’s aped the move with its own identically named ‘Aldi Price Match’ campaign.