Cadbury goes ‘back to its roots’ with £12m campaign 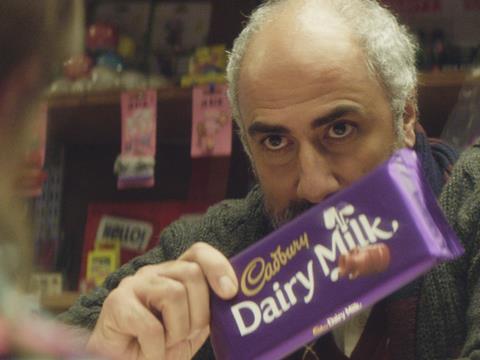 New ad sees a shopkeeper give away a Dairy Milk bar

Cadbury is going “back to its roots” with a £12m push that sees the supplier explore “everything good” about itself.

New positioning focused on the company’s history as “a family brand founded on generous principles” will be led by a high-profile TV ad for Dairy Milk.

Set to make its debut on Saturday (13 January) during ITV’s The Voice, it tells the tale of a young girl who wants to buy a chocolate bar for her mum. Finding she has no money in her purse, the shopkeeper gives her the snack for free.

It will be backed by a giveaway from 25 to 28 January, allowing London shoppers to ‘buy’ a Dairy Milk bar for a ‘knickknack’ such as a button. It will take place in a pop-up shop on Greek Street in Soho, with 10,000 bars up for grabs.

The £12m drive – which retains the ‘There’s a glass and a half in every one’ tagline – will be underpinned further by digital, social, PR, experiential and sampling, and a second ad later in the year.