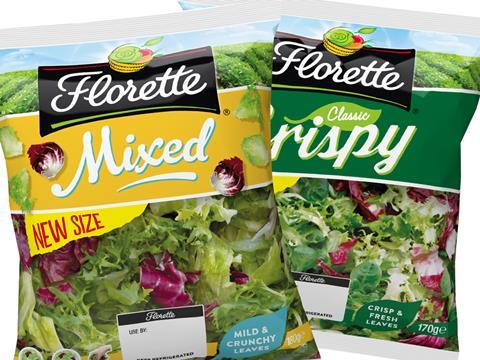 Florette has undertaken the “biggest ever” overhaul of its bagged ­salads range in an attempt to reduce wastage and revive the category’s ­flagging sales.

The £6m revamp, which will begin rolling out from next week, will see Florette introduce new pack sizes and better on-pack communication explaining the number of portions in each bag.

In light of media coverage of ‘shrinkflation’ - reducing packs while keeping the same price - MD Neil Sanderson stressed the move was about changing both pack size and price “in proportion to meet consumer needs better”.

Prices for iceberg bags have fallen from £1 to 79p, while the cost of the smaller peppercress bags has fallen from £1.20/25 to £1.

“We are responding responsibly to the desire for reduced wastage and making shopping for salads easier,” he said.

Research by sustainability charity Wrap in 2012 found 37% of all bagged salad sold in the UK was wasted at home, while 2013 analysis by Tesco of its own data and industry-wide figures suggested as much as 68% was wasted.

With wastage a key barrier to purchase, Florette commercial director Sandy Sewell said it was “time to change”.

The overhaul, which also includes a new Florette logo and artwork redesign, will be supported by a multi-channel marketing campaign.