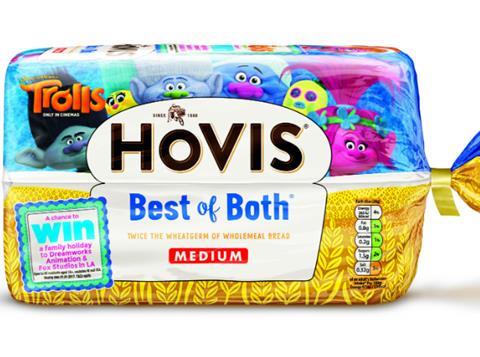 Hovis is rolling out an on-pack promotion across eight million loaves of Best of Both, as part of its partnership with Trolls, the latest film from DreamWorks Animation.

Beginning ahead of the ‘colourful’ movie’s 21 October release, the push will give ‘one lucky shopper’ the chance to win a family holiday to Los Angeles, where they will visit the DreamWorks and Fox studios. Entrants will find out if they are the winner by entering the 10-digit code from their loaf’s best before tag into the Hovis website.

“Trolls is a perfect fit for Best of Both, with its family-friendly appeal,” said Hovis marketing director Sharon Barraclough. “We are confident the release of Trolls and the prize on offer will drive further demand and attract new shoppers.”

In May, Hovis revealed a softer recipe and updated packaging for Best of Both, with the aim of maximising appeal to children as the bakery brand attempted to retrieve £59.8m lost in value sales [IRI 52 w/e 27 February 2016].

Hovis suffered a £19m loss in its second year of trading since being spun out of Premier Foods, according to accounts filed at Companies House last month.