Kinder Surprise is latest brand to get Minions tie-up 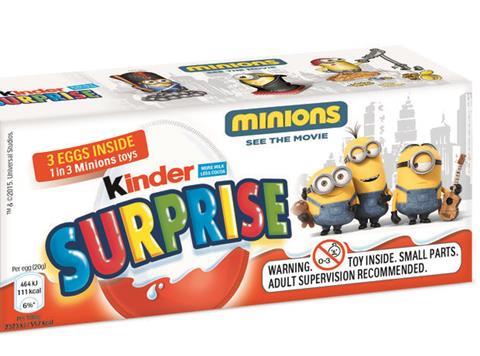 Ferrero is jumping aboard the Minions train with the launch of limited-edition Kinder Surprise eggs containing toys of the wildly popular animated characters.

Rolling out from August, the eggs will be available as singles (rsp: 86p) and in packs of three (rsp: £2.21). The launch will be supported by a TV campaign, running for five weeks from 14 September, along with VOD and in-store media. Ferrero said the advertising would form part of a £3.6m spend on the brand in the coming months.

Minions, a spin-off from the Despicable Me series, hit cinemas on 26 June and is expected to be one of the year’s biggest films. Despicable Me 2 was the highest grossing film of 2013 in the UK, taking in £46m.

Kinder is the latest in a string of brands across multiple categories to partner with the film. Others include Petits Filous Frubes, Capri-Sun, Green Giant and Honey Monster Loops.

Last week, Asda CEO Andy Clarke told The Grocer the Minions brand had been an “unbelievable” success, adding: “The amount of merchandise we are selling through is phenomenal – better than expected.”

Sales of the Kinder Kids brand, including Surprise, were up 61.2% last year to £51.9m, making it grocery’s single fastest-growing food brand in The Grocer’s 2014 Top Products report [Nielsen 52 w/e 11 October 2014]. The brand’s success was acknowledged when it was named Brand of the Year at the The Grocer Gold Awards in June.

“We continue to experience a stellar performance across our Kinder portfolio,” said Levi Boorer, customer development director at Ferrero UK. “Kinder is a household name that parents trust and their families love, and keeping people engaged with new and limited edition toys, such as Minions, is a fantastic way to help our loyal retailers drive sales.

“It is vitally important that we look at all new product development through a long-term lens, using robust insights to ensure it delivers against the key pillars of value, relevance and uniqueness for shoppers and consumers.”

Boorer added the launch was the “beginning of another exciting wave of news for the brand”.