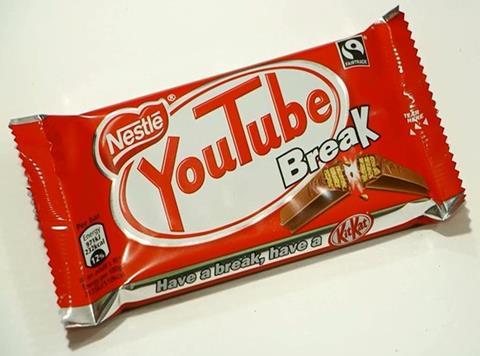 Nestlé has joined forces with Google to replace the word Kit Kat on pack with ‘YouTube’.

The confectioner is currently rolling out limited-edition Kit Kat packs in the UK as part of its ongoing global Celebrate The Breakers’ Break campaign. While 600,000 bars will feature the ‘YouTube Break’ branding, a total of 100 million other bars will carry one of 71 other forms of branding such as ‘Me Time Break’ or “film Break’.

The collaboration with Google follows the two business teaming up in 2013 to name version 4.4 of Google’s Android operating system KitKat.

Google’s voice search technology is also being integrated into the push, with users who ask their smartphone to search for “KitKat YouTube my break” sent to a KitKat video followed by a playlist of the latest top four trending YouTube videos.

“With half of YouTube views now on mobile devices, ‘YouTube my break’ is a fun way for more people to interact on the channel and enjoy the best videos available,” said Google UK branding & consumer markets MD David Black. “With up to 300 hours of video content uploaded to YouTube every minute, the top trending videos are likely to be changing all the time, making each new search as exciting as the last.”

Nestlé and Google said the aim of the YouTube branding was to encourage people to make the most out of their down time, adding it was based on the consumer insight that ‘KitKat consumers are also YouTube fans’.

The global Celebrate The Breakers’ Break campaign will see 72 different types of ‘breaks’ feature on more than 400 limited-edition designs across two and four-finger and Chunky bars, with more than 100 million specially designed packs produced in total over the course of the push.