M&M's to give away US holidays in promotion 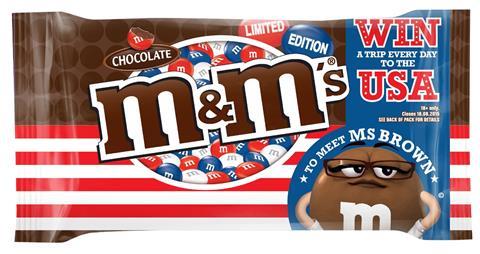 M&M’s is giving consumers the chance to win a trip to the US to meet Ms Brown, one of the characters in the brand’s Election marketing campaign.

The promotion will feature on limited-edition Ms Brown packs of the chocolates, in single, treatsize and sharing bags. The packs, which hit shelves on 13 May, include a US-inspired red, white and blue colour mix.

One holiday will be given away every day from 22 June to 18 July, with winners getting to choose from three destinations: New York, Orlando and Las Vegas. All three have an M&M’s World, where the meeting with the character will take place.

The launch of the Ms Brown packs is being supported by a TV ad, airing for 26 weeks, and a range of POS materials including dumpbins and counter top units.

“Building on the success of our Character Election campaign, we’ve launched limited-edition Ms Brown M&M’s to keep the public excited about the new character,” said Mars Chocolate UK trade communications manager Bep Dhaliwal. “We know M&M’s limited editions perform well, as last year we saw an uplift in sales of our Brazil M&M’s packs. We recommend retailers stock up early and use the branded POS available.”