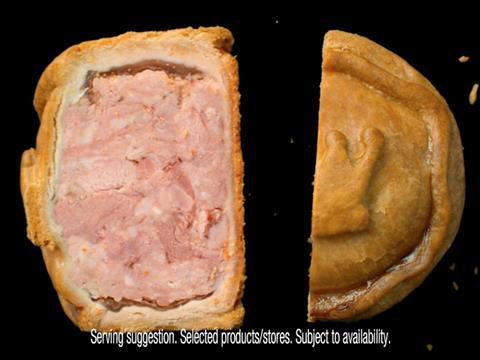 The ad has been created by RKCR/Y&R, the agency that’s also responsible for the M&S Adventures In campaign, including the recent ‘Adventures in Fiesta’ celebrating its summer food range from South and Central America.

The 10-second TV spot coincides with M&S’s official partnership of the historic Patron’s Lunch, planned for the Mall in London on Sunday, and marking The Queen’s 90th birthday and patronage of more than 600 organisations, from which the 10,000 guests are invited.

“M&S’s bespoke range of British picnic treats makes it incredibly easy to celebrate the event wherever you are, and we’re proud to give our iconic Adventures In campaign the royal treatment,” said RKCR/Y&R managing partner Priya Patel.

The Patron’s Lunch picnic range in M&S stores focuses on produce and ingredients from the UK, and includes sandwiches, pork pies, asparagus, trifle and cupcakes.

The 10,000 guests at the Patron’s Lunch will each be given an M&S wicker hamper containing a lunch and afternoon tea picnic.

“We’ve worked closely with our farmers and producers to ensure we showcase the very best of British produce at The Patron’s Lunch, and we’re looking forward to seeing guests enjoying the picnic on The Mall,” said head of M&S product development Sandra Ziles.

The salmon mousse uses M&S Lochmuir salmon, which has been slow-smoked over wood chips from an oak tree grown on the Sandringham Estate in Norfolk. The pork pies have been hand-finished with a pastry crown, and the apple juice is made using the Windsor apple variety from Suffolk.

The hamper will also include a plate, cutlery, wine tumbler and a napkin plus a can of Pimm’s and a bottle of M&S Scottish spring water.