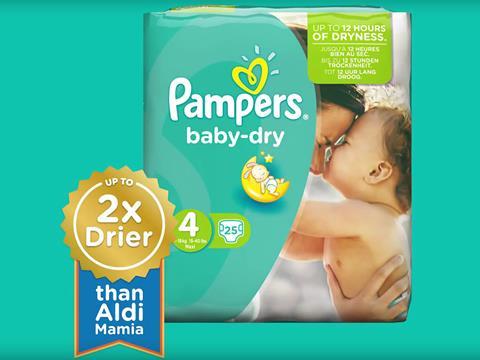 Brands have often compared and contrasted their products against other rival brands. It’s also not unknown for retailers to promote the credentials of their own label, notably in Aldi’s award-winning Like Brands campaign from 2013. But we’ve never seen a brand take a pop at a retailer in its advertising - until now.

On 22 April, P&G launched an ad in which it claimed its Pampers Baby Dry nappies were “up to 2x drier” than Aldi’s Mamia own-label range.

The 75-second ad - in which two mums test the ranges and remark on the “big difference” - saw P&G belatedly return fire at Aldi, following an execution of the discounter’s Like Brands creative, in which it compared the price of Pampers with Mamia (and ended with an “I’d like a vasectomy” zinger from a downbeat dad).

Aldi’s response has been more swift: within four days a TV ad announced: ‘Aldi Mamia nappies beat Pampers three years running at the Mother & Baby Award’, referring to its gold gong for best disposable nappy brand. It was a feat even more amazing than a woman giving birth to a grown man, according to the 30-second slot. There was even a money-back offer for unsatisfied customers.

So what’s been the reaction among consumers? Why has Pampers gone on the offensive against Aldi? And will the move backfire?

The all-out nappy war has divided consumers. Those in the Aldi corner have taken to social media to question Pampers’ 2x drier claim, with one arguing “Aldi nappies are a fraction of the price and keep my six-month-old dry all night”. But Pampers has plenty of support too: its Facebook page has received as much positivity as criticism.

It’s brave, nonetheless, for a brand to challenge a retailer (and a customer to boot). But it has a lot more to lose. When Huggies exited the nappy market in 2012, P&G was hoping to clean up. But while Pampers’ £294.2m share of the nappies market is worth £69.2m more than all own-label nappy sales put together, sales fell 10.8% in 2015, with volume sales declining 8.5% to 59.5 million [IRI 52 w/e 28 November 2015]. Meanwhile, own label’s nappy sales might be down 8.9% to £225m, but volume has shot up by 6.7% to 145 million. And though Aldi doesn’t disclose its own sales data, Mamia over-indexes massively against Aldi’s overall 6% market share, and is a significant footfall driver.)

P&G insists there’s nothing extraordinary about the Pampers ad. It was “continuing to stay true to a business model we have followed for many years,” says a spokeswoman, providing shoppers with “the facts about our products to help them in their purchase decisions”.

But Charlotte Hamill, joint MD of digital agency Born Social, detects a new form of marketing warfare at work, in which brands harness social media communities. “It’s a brave move and the truest test of brand advocacy, but if you’re confident enough to enter a public popularity contest, it makes for juicy PR.”

Aldi is unlikely to end the argument there, however. In addition to the initial TV ad riposte, The Grocer understands the discounter is exploring “all available options”, including a challenge via the ASA and other legal avenues, as it believes P&G needs to substantiate its claim.

Whether it goes further and delists the small number of P&G brands it stocks is harder to say. But P&G’s move has not gone unnoticed among Aldi rivals. As one big four supermarket CEO told The Grocer: “It’s good to see P&G knows which side its bread is buttered.”