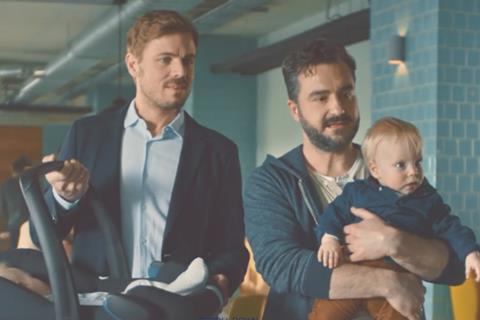 Philadelphia has become the first food and drink brand to be censured by the Advertising Standards Authority under its new gender stereotyping rules.

A total of 128 complaints against a TV and VOD ad were upheld by the ASA over its portrayal of the “harmful stereotype” of new dads as “unable to care for children as well as women”. The advert was banned this week alongside a VW ad, which showed men being adventurous while a woman sat by a pram and also fell foul of the new rules.

The Philadelphia advert, seen on 14 June, featured a woman passing a baby to a man in a restaurant, before showing another man carrying a baby in a car seat.

As both men chatted about being “new dads”, the ad showed the men being distracted by a conveyer belt serving buffet food while their children were carried away on the same belt. Once the pair had retrieved their children, one parent said: “Let’s not tell mum.”

In its response to the ASA, Philadelphia owner Mondelez said the ad was intended to highlight the appeal of the product “by showing a humorous situation in which parents found it so delicious they got momentarily distracted from looking after their children”.

It believed the gender roles could be reversed and that the same key message about the desirability of the product would not be altered.

But while recognising the “light-hearted and comical” tone of the ad, the ASA considered the scenario “relied on the stereotype that men were unable to care for children as well as women and implied the fathers had failed to look after the children properly because of their gender”.

The ASA said the ad must not appear again in its current form, adding: “We told Mondelez to ensure their advertising did not perpetuate harmful gender stereotypes, including suggesting that stereotypical roles or characteristics were always uniquely associated with one gender.”

However, the decision was described as “extremely disappointing” by a Mondelez spokeswoman.

“We take our advertising responsibility very seriously and work with a range of partners to make sure our marketing meets and complies with all UK regulation. This includes pre-approval from a recognised television advertising body, before any advert is aired to the public.”