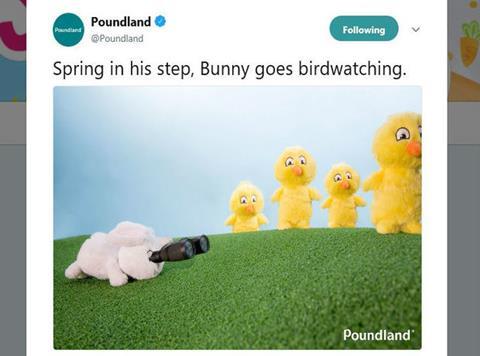 Poundland appears to be courting fresh controversy with its latest Twitter campaign, an Easter push featuring two characters named ‘Bunny and Chick’. The characters made their debut in a tweet on Friday saying ‘Introducing Bunny and his side Chick! They’re hopping on board with us for Easter… Watch this space to see what they get up to.’

That was followed on Saturday by a tweet showing the bunny looking through binoculars at a number of the ‘chick’ characters, with the message, ‘Spring in his step, Bunny goes birdwatching.’

A further tweet posted yesterday shows the chick branding the bunny with an ‘X’ on its backside and the message ‘I’ve got a way to make you hot and cross, Bunny.’

But others have praised the tweets as ‘funny’.

The same posts have been shared by Poundland on Facebook.

Poundland drew criticism over a Christmas campaign which featured a toy elf in a series of sexually suggestive tweets and Facebook posts. They included one showing the elf dangling a teabag between his legs over a female doll wearing a T-shirt with the word ‘power’, and captioned ‘How do you take your tea? One lump or two?’

The posts prompted 84 complaints to the Advertising Standards Authority, which ruled they were likely to cause offence and should not be repeated in the same form.

Poundland responded with a tweet showing the elf behind bars in his ‘cell at Wormwood Scrubbers’ and a statement which included ‘I’m sad the ASA found my double entendres hard to swallow.’

The latest ‘Bunny & Chick’ tweet, posted today, shows the bunny reading a newspaper with the headline ‘Poundland does it again!’ An accompanying message says: “I’m afraid side-chick, some of the papers say it’s Bad Hare Day.”

“Looks to us like people are loving it,” said a Poundland spokeswoman. “We can, however, confirm no chicks or bunnies were harmed in the making of our posts.”