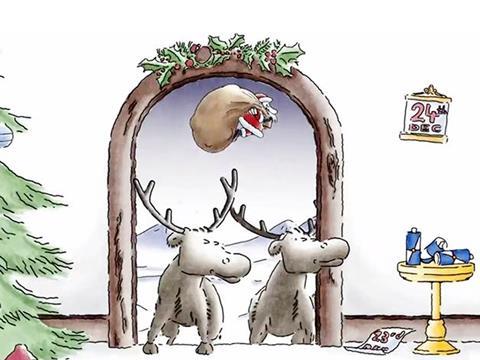 Red Bull has returned to screens with a new instalment of its animated ad campaign.

The film follows Santa’s reindeers as they wait for him to arrive, only to be surprised when he flies out of the house carrying the presents on his back after drinking a can of Red Bull, leaving them behind.

Running for six weeks on TV, online and in cinemas, the ad is expected to be seen by 78% of 16 to 34-year-olds. It will be supported by Christmas-specific messaging at petrol forecourts and motorway service stations, which Red Bull said would target the 12 million Brits who drive to see family and friends in the three days before Christmas. The push also uses out-of-home proximity advertising featuring messaging based around typical Christmas frustrations.

“Christmas can be a busy and stressful time and there are many occasions where a boost of energy can help consumers power through, whether it’s for work, long drives or just making the most of the party season,” said head of category marketing Gavin Lissimore.