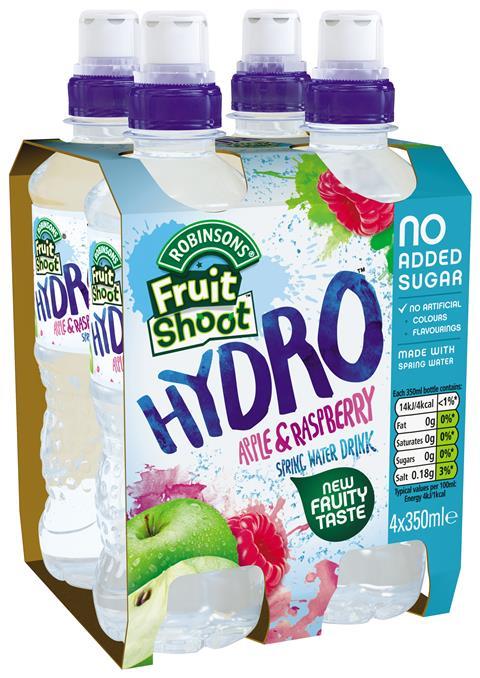 The supplier has reformulated the no added sugar drinks to improve the fruit flavours while reducing the sweetness. The level of fruit sugars in the products has not altered, with the move designed to make the drinks more refreshing.

Rolling out from the middle of next month, the drink will feature new packaging to push the refreshment message. Changes will include enlargement of the name Hydro, a new splash graphic, more fruit imagery and an on-pack flash highlighting the new taste. The drinks will be available in blackcurrant and orange & pineapple in four x 350ml (rsp: £2.39) and eight x 200ml (rsp: £3.25) packs, and apple & raspberry in four x 350ml (rsp: £2.39).

“As well as driving awareness of the new formulation, the new-look packaging will create great on shelf stand out.”

Britvic has also reformulated Fruit Shoot My-5 and brought it in line with regulations on requirements for school food.

Each 200ml bottle (rsp: 60p) of My-5 contains 75% juice content and one of the five-a-day portions of fruit and veg. Sporting a ‘schools compliant’ on-pack claim, it will be available in apple & blackcurrant, apple & pear and orange & pineapple flavours next month.