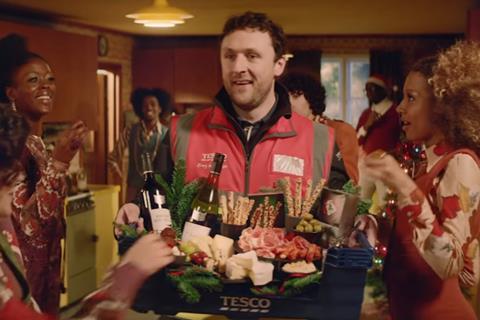 Tesco’s Christmas ad was the most memorable supermarket spot in November, new data from YouGov reveals.

YouGov’s BrandIndex tool - which is based on surveys of 4,000 consumers - ranked the ‘ad awareness’ of Tesco’s time travelling delivery driver campaign the highest in the supermarket category, followed by efforts from M&S, Aldi, Sainsbury’s, Asda and Lidl.

Coca-Cola was the highest placed fmcg brand for ad awareness with its long-running Holidays are Coming campaign. Cadbury and Walkers were also ranked highly.

Christmas ads 2019: Who’s nailed it and who’s failed it this year?

Tesco also secured the highest ‘consideration score’ of the mults - a measure of whether a consumer would purchase from the brand in the future. It was followed by Sainsbury’s, Aldi, Lidl, Morrisons and Asda.

Though it ranked second among supermarkets for ad awareness, M&S’s Go Jumpers and Go Pyjamas clothing ads saw it placed number one among high street fashion retailers for awareness.

Which ads did The Grocer love most this year? Find out in our Top Campaigns report 2019