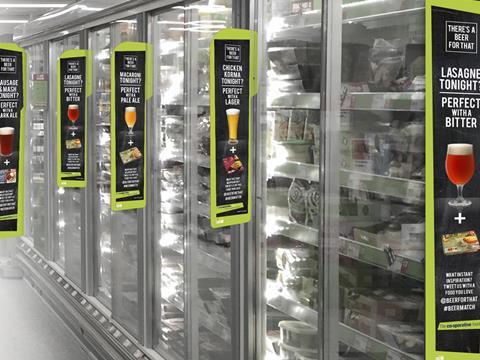 Central England Co-operative has launched a new tie-up with the ‘There’s A Beer For That’ campaign.

Some 200 of the co-operative’s food stores will be displaying There’s A Beer For That marketing materials from their cabinets and counters, encouraging shoppers to choose a bottle of British beer to go with that evening’s meal.

The arrangement is also the first time PoS materials will have been deployed by TABFT away from the beer fixtures.

Food and beer pairings will focus initially on some of Central England’s most popular own brand meals such as a pale ale to match a sweet and sour dish, a stout to go with a beef and black bean meal and a bitter to accompany a lasagne.

These will be followed by combinations for the BBQ season to help shoppers think about beer differently. There will also be tasting notes for each of the beer styles to educate shoppers and help them match beers.

“We’re looking forward to showing our customers something new and helping them to choose their favourite beer and food pairing whilst in store,” said Central England retail category manager Gary Berns.

TABFT’s marketing lead Neil Gannon said: “Working with Central England Co-operative is a great partnership for both sides, There’s A Beer For That can reach yet another new audience of those wanting to try something different, which really highlights the quality, diversity and versatility of the campaign and category.”