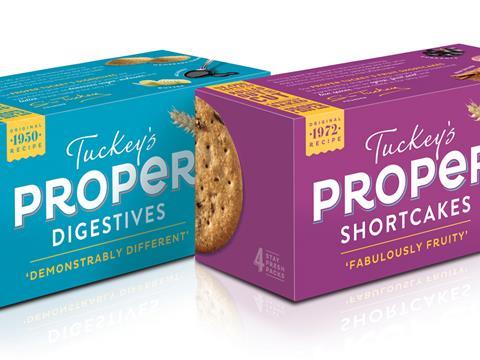 Biscuit brand Tuckey’s Proper has been revamped with new packaging and an additional variant.

The brand was launched a year ago by Simon Tuckey - a former McVitie’s marketing director - and is designed to challenge mainstream brands, which Tuckey said had “taken the good stuff” out of recipes. The ingredients include molasses and demerara sugar.

New-look packaging has made the word Proper more prominent than ‘Tuckey’s’, while the brand’s ‘made to original recipe’ USP has been highlighted on a ribbon around the pack.

The biscuits are being rolled out now into 130 Waitrose stores on an exclusive 12-month basis alongside a new shortcake also made to a traditional recipe (rsp: £1.69).

Originally launched into Sainsbury’s, the brand lost its listing with the retailer in June this year as part of a “major cull of brands”, said Tuckey, adding the business had not had time to establish itself “above Sainsbury’s cutting line”

“We are trying to reverse many years of quality and price degradation in biscuits - it’s not a quick job,” he added.